TTC buses kept Toronto on the move when North America’s largest electricity blackout hit the city on Thursday, August 14. At 4:13 p.m. a massive power outage darkened the entire Greater Toronto Area, much of Ontario and New York State and six other states on the Eastern Seaboard of North America. 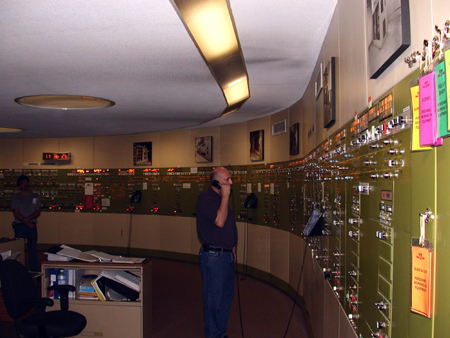 TTC buses kept Toronto on the move when North America’s largest electricity blackout hit the city on Thursday, August 14. At 4:13 p.m. a massive power outage darkened the entire Greater Toronto Area, much of Ontario and New York State and six other states on the Eastern Seaboard of North America. As many as 50 million people were affected by the blackout. The city found itself with no subways, no cell phone service, no traffic lights, no elevators or escalators, no bank machines and no way to pump gas.

4:13 p.m.: The city of Toronto and the TTC experienced a sudden and complete loss of all hydroelectric power. Transit Control’s mimic boards shut down. Assistant Superintendent Robin Gerus initiates a stop-and-stay order.

The day’s weather forecast calls for temperatures to hit the low 30s … Municipalities across Ontario are advised to conserve energy … The City of Toronto begins an orderly shutdown of non-essential services. Essential services, such as fire, emergency response and transit, continue operating. The CNE opening is postponed.

6:19 a.m.: TTC announces limited service as a result of the power outage; no subway/rt; Wheel-Trans essential trips only. Streetcars are running.

7:30 a.m.: Deputy Mayor Case Ootes announces on the radio from the City’s EOC that the TTC was able to refuel its bus fleet and all available buses will run on a reduced regular schedule.

9:59 a.m.: TTC announces the subway/rt will remain closed until possibly Monday. “The subway requires full power without interruption for trains, signals, switches, lighting, communications and emergency ventilation to ensure safe operation. The subway will not be running until the TTC can be assured of a stable power supply,” states Safety Manager John O’Grady.

Toronto Hydro reports the city is receiving 80 per cent of its electricity supply, but only 50 per cent of residential areas are receiving power. Rotational blackouts are underway.

4:39 p.m.: TTC announces that it will replace streetcar service with buses. With the rolling blackouts in the city, it becomes clear that the safety and reliability of service can’t be guaranteed. TTC reaffirms its need for a stable power supply to resume operation of the subway.

Pockets of the city still without electricity.

“Rolling blackouts would hurt Toronto more than any other city in Ontario or Canada. It would mean we couldn’t open the subway. The transit system would be practically shut down. Our transit system carries over one million people a day – it’s vital to the people who live within the GTA and beyond,” Mayor Mel Lastman declares.

4:15 p.m.: CGM Rick Ducharme makes a much-anticipated statement: “Tomorrow, the entire TTC service will be operating, including the subway. We now have the best assurance under the circumstances that Toronto Hydro will continually feed the 40 substations that are integral to the subway system. We feel that we can operate safely or we wouldn’t be doing it. The subway is protected.” He adds, “The 10,000 employees who run the TTC are dedicated. You’ve seen what we can do when issues come up. If any issues come up tomorrow or any time next week, we’ll deal with them on a professional basis as we always have.”

6 a.m.: CGM Rick Ducharme takes the first southbound train from Finch Station. TTC and Toronto Hydro staff had spent the weekend devising a plan to protect the subway, and the 40 substations that feed it power, from rolling blackouts. “That was the major challenge,” said Toronto Hydro President Courtney Pratt.

While all across the city motorists sat in long line ups to gas their cars, there was no mad scramble to fuel buses at Birchmount Garage thanks to Mechanic Ahmad Rasheed. As soon as the lights went out in Toronto, a bright light went on in Rasheed.

“Action included hooking up fuel lines, starting an air compressor and using bus batteries with head lamps to supply lighting for the fuelling area, as well as the Traffic Office and CIS Control.”

“This makeshift system was used successfully over two nights and allowed for the provision of full service on Friday (Aug. 15), and an additional 30 buses for Saturday service. This avoided ferrying buses to another location, which at the best of times interferes with the fuel operation at other garages and creates delays to service,” said Edwards. 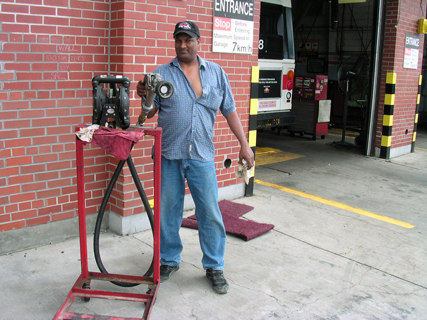