R.T. (Rapid Transit) Day in the history of storied old Yonge Street was September 8, 1949, when an official ceremony marked the driving of the first steel pile. 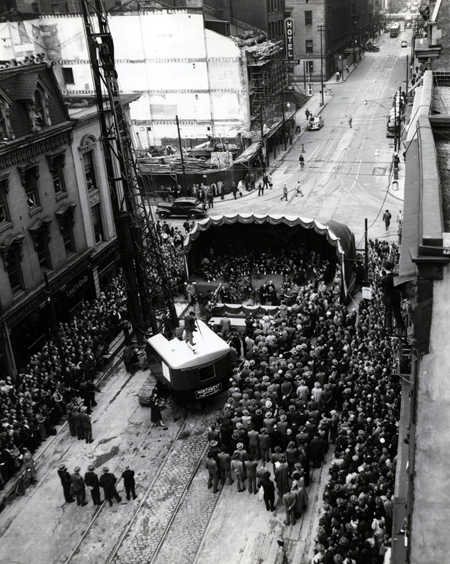 Sept. 8, 1949: Torontonians watch as hammer of huge pile driver hits end of first soldier beam and drive it into the ground.

R.T. (Rapid Transit) Day in the history of storied old Yonge Street was September 8, 1949, when an official ceremony marked the driving of the first steel pile.

During the latter part of August, evidences of preliminary probings by the General Contractors were apparent. The street itself, long undisturbed, bore strange marks heralding mighty incisions and upheavals.

Citizens, generally well-informed in local affairs, began asking strange questions. It was evident that, notwithstanding the many informative articles in the daily press and the splendid model of the subway on display in the City Hall, the “man in the street” had a very hazy and often fantastic idea of where the subway was going and what it would be like.

The Yonge Street Subway will be four-and-a-half miles long, starting at Front Street and terminating at Eglinton Avenue. It will burrow underground as far up as Davenport Road. From there on to Eglinton, it will alternate between underground and open cut. It is expected to be completed in 1953, enabling our passengers to travel from Front Street to Eglinton Avenue in 15 minutes.

When Toronto’s housewives go shopping downtown, they won’t have to scurry across the wide intersections – they can walk in a leisurely manner along an underground passageway into the big stores. If they want to shop between subway stations, they can get a transfer to the surface buses on Yonge Street. The comfortable subway cars will be very similar to the modern PCC cars, but they will be wider and won’t have steps as the station platform will be level with the car floor.

When you see and hear the large steel piles being driven down along both sides of the street, you will know they are to support the sides of the excavation while the subway is being built.

The street will be covered with a temporary wooden deck, which normal traffic will continue to run.

Here are some figures with which to impress your friends and visitors. One-and-a-half million cubic yards of earth will be dug out. Over a million bags of cement and over 15,000 tons of steel will be used. If the amount of lumber required for the job were placed end to end in the form of planks 12 inches wide and two inches thick, they would stretch half way from Toronto to Vancouver.

Of course, before we can travel in the world’s newest and best subway, we will have to put up with certain inconveniences – particularly the people who live in the northern areas in the neighbourhood of Yonge Street. While the work is in progress, travelling time will be somewhat slower on Yonge Street, but when the job is done the inconveniences of the past will soon be erased by the swift, comfortable ride provided by the subway.