Toronto Rocket launched one year ago

This past Saturday (July 21) marked the first anniversary of the official launch of the first Toronto Rocket subway train into revenue service. 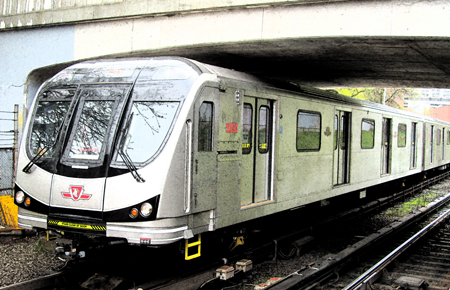 This past Saturday (July 21) marked the first anniversary of the official launch of the first Toronto Rocket subway train into revenue service.

The TTC currently has a total of 19 train sets, which are carrying customers along the Yonge-University-Spadina Subway. Another two trains are on property being commissioned for service. All 70 Toronto Rockets are scheduled to be in service by mid-2014.

Officials from senior levels of government and the TTC, and hundreds of excited customers, took the inaugural run from Downsview Station on the morning of July 21, 2011.

In 2010, the TTC exercised a contract option with Bombardier Transportation to purchase an additional 31 train sets to replace the TTC’s oldest fleet as it reaches its 30-year life expectancy, and to meet future ridership demands once the Spadina Subway extension opens for business.

The Toronto Rockets, and the re-signalling of the Y-U-S line, will ultimately allow the TTC to improve headways up to 90 seconds as well as carry more people.

Did you know that the production of the Toronto Rockets uses laser-beam welding technology, which eliminates the exterior rivets common to older subway fleets?

Laser-beam welding was introduced on the fourth train set to arrive at the TTC. The first three train sets used spot welding, which can be identified by small, flush spots on the exterior surface. Laser-beam welding involves melting metal pieces with a high-intensity beam of light. With laser welding, it’s possible to create single-joining spots or welds in continuous wave mode (or endless laser-welded joints), which results in highly superior side wall finish. You can spot the difference on train sets 5381-5386, 5391-5396 and 5401-5406.