Deputy CGM Andy Byford briefed the media this morning on Feb. 27 on the previous night’s shooting of a Collector at Dupont Station. 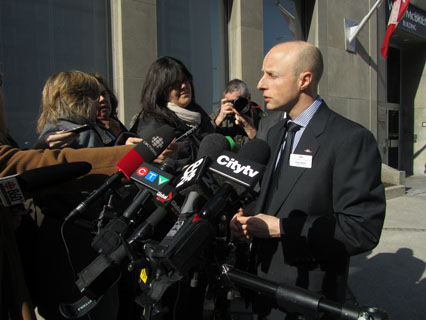 Deputy CGM Andy Byford briefed the media this morning on Feb. 27 on the previous night’s shooting of a Collector at Dupont Station.

Standing outside TTC Head Office with TTC Chair Karen Stintz, Byford stated that the Collector (who is not being named publicly at this time) underwent surgery last night and is okay thanks to the “miracle workers” at St. Michael’s Hospital.

"Thanks to the expert care he was given, he should make a full recovery,” Byford said. “We were told the operation was successful, and clearly our thoughts are with him and his family.”

Byford said the TTC is making sure that whatever help he or his family needs is provided on an ongoing basis.

After meeting with Local 113 President Bob Kinnear, a joint message was released re-affirming that management and union are working together to fast track any activities that can improve the security of employees and the public.

Byford also thanked the Toronto Police for its initial response to the attempted robbery, which took place at about 7:20 p.m. last evening. Police are continuing their investigation with full co-operation from the TTC to ensure it concludes in a prosecution with the stiffest possible penalty. Police released images of the suspect at a news conference this afternoon.

“I’m appalled that this has happened. No one comes to work to be shot or assaulted in any way. The key thing is that our member of staff is on the mend and we send him our best wishes,” he said.