Train clean starts at end of the line

The TTC has introduced end-of-line train cleaning at Kennedy and Finch terminal stations in the off-peak hours. 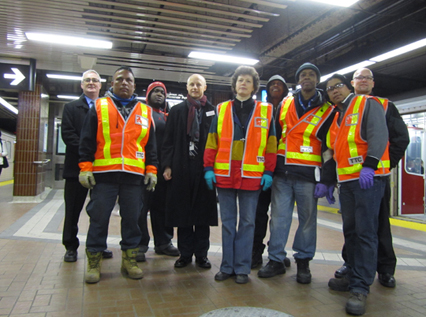 The TTC has introduced end-of-line train cleaning at Kennedy and Finch terminal stations in the off-peak hours.

End-of-line cleaning crews are now deployed at one terminal station on both the Bloor-Danforth and Yonge-University-Spadina Subways. The teams have less than four minutes to get through each train that comes in.

“The trains turn up at the station and our fabulous team of cleaners have a small window of opportunity to jump on, equipment in hand, go through and quickly pick up all the various litter,” Byford said.

The TTC has also started an in-service litter pick between College and Osgoode Stations between the rush periods. A small crew conducts a mid-trip clean, and will go as far as to ask customers if they are finished with their garbage. This will guarantee that on every trip each train gets cleared of debris, he said.

Apart from a cleaner commute and improved customer satisfaction, the TTC expects less trash being blown to track level and into the tunnels where it creates a fire hazard, and ultimately lengthy delays to subway service.

“This visibly shows that we serious about our customer service improvements,” Byford said. “Once the public sees us doing our bit we may see more customers chipping in and doing their bit in keeping the system clean.”