The Toronto Police Financial Crimes Unit announced a number of arrests in Project Rocket at its downtown headquarters on Oct. 2.

A joint investigation determined that point-of-sale terminals (swipe machines) at various businesses in the GTA were being compromised or switched in order to steal debit- and credit-card information. The suspects were using fake cards to fraudulently purchase the TTC passes.

“Earlier this year, we became aware of large numbers of fraudulent debit transactions at our Pass Vending Machines,” said Staff Sergeant Mark Russell (pictured above). “Our investigation allowed us to capture video images of several persons, and identify trends and patterns in criminal activity.”

Project Rocket resulted in the arrest of four suspects at North York Centre Station on Sept. 27. A fifth suspect was arrested shortly after. Five men are facing multiple charges for conspiracy to commit fraud, fraud over $5,000 and numerous other counts of fraudulent use of credit-card data.

Victims in this case, both individual and corporate, can take comfort in that financial institutions compensate for any losses due to data theft.

The TTC will be outfitting its 60 PVMs with chip-and-pin technology in 2013. All debit and credit card machines at Collector Booths already have the technology. 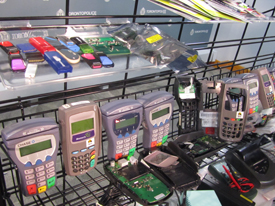