Road Master Peter Pavlovski, of the Rail Infrastructure Department, lost his life on the job this morning (Sept. 14). Mr. Pavlovski, a 22-year TTC veteran, was 49. 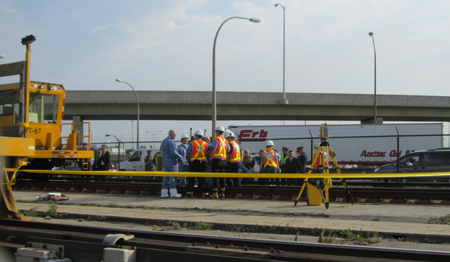 Road Master Peter Pavlovski, of the Rail Infrastructure Department, lost his life on the job this morning (Sept. 14). Mr. Pavlovski, a 22-year TTC veteran, was 49.

“At approximately 4:45 a.m. today, about 100 yards north of Yorkdale Station, a TTC employee was struck and killed by one of our engineering trains. That member of staff was Road Master Peter Pavlovski,” said CEO Andy Byford at a news conference with TTC Chair Karen Stintz from Head Office. “On a terribly shocking day for the TTC, our condolences go out to Peter’s family and his co-workers throughout the Commission.”

Two other employees were taken to hospital with non-life-threatening injuries.

“We will take whatever actions are needed and introduce what lessons are learned to make sure such a tragic incident never happens again,” Byford said.

Out of respect for Mr. Pavlovski, and his co-workers, tomorrow’s TTC Customer Town Hall in Etobicoke was cancelled.

In Trust For Peter Pavlovski

The TTC has opened a trust fund established for the children of the late Mr. Peter Pavlovski. Employees and pensioners wishing to make a donation can do so at any branch of the CIBC in the Greater Toronto Area in the name of Toronto Transit Commission – In Trust For Peter Pavlovski. When making donations, please advise the branch that you are making a third-party deposit (or donation) to account no. 00212/70-35519.

Mr. Pavlovski is survived by his wife, Gina, and children, Kelsey (13), Andrew and Marissa (both seven).

Letters to the Editor

Please extend our deepest sympathy to the family of the worker who lost his life in this tragic accident. Our prayers and thoughts are with them at this time.

We mourn his loss and keep the other injured employees, and all the families, in our prayers. May his soul rest in peace.

We pass this information on with sad hearts. I do believe this tragedy has hit all TTC personnel with much sadness. Our hearts go out to Peter’s family.

The TTC Inspector and the contractor’s workers at the Queensway Garage construction site assembled at 10 a.m. on the 19th for a memorial minute and silence and tribute to Mr. Peter Pavlovski. We shared a respectful moment to reflect on worker safety and honour Mr. Pavlovski’s contributions as a long-time TTC worker. Our condolences to the family from the workforce here.