Articulated buses officially made their return to revenue service on Dec. 20. 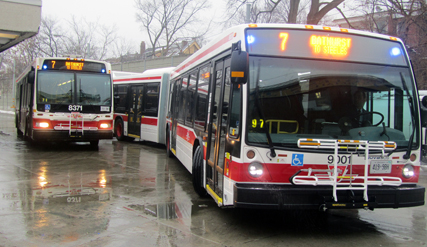 Articulated buses officially made their return to revenue service on Dec. 20.

Wilson-Bus Operator Domenic Albanese departed Bathurst Station at 9:45 a.m. on the 7 Bathurst route carrying numerous passengers and avid photographers onboard. Bendy bus #9001 is the first of 153 that are slated to gradually hit the road. It’s been 10 years since the TTC saw its last articulated buses in service.

The 18.3-metre (60-foot) buses are scheduled to be introduced on the following routes:

In September 2012, the TTC Board approved an initial contract for 27 articulated buses with Nova Bus (a division of Volvo Group Canada Inc.). Last March, the Board approved a contract amendment worth $119.4 million for the purchase of an additional 126 articulated vehicles for delivery starting in 2014.