The Toronto Police Service recently presented a Partnership Award to the TTC’s Investigative Services Unit (ISU) in recognition of their professionalism and teamwork on the Project Rocket file. 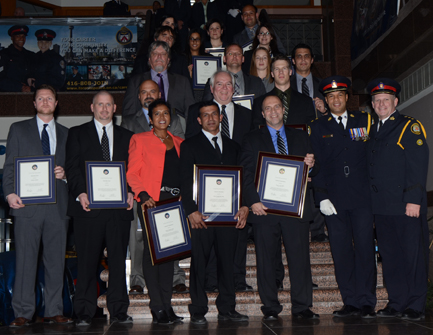 The Toronto Police Service recently presented a Partnership Award to the TTC’s Investigative Services Unit (ISU) in recognition of their professionalism and teamwork on the Project Rocket file.

Last October, police announced numerous arrests in a fraud ring that saw forged credit and debit cards used throughout Canada, the U.S. and Europe with a financial exposure to the banks estimated at $76 million.

In 2012, the TTC and Global Payments Canada informed Toronto Police that they had received information from one of the banks that suggested that debit cards were being compromised at TTC Pass Vending Machines (PVMs). The machines were not chip-enabled and were being exploited by fake cards.

While the ISU worked quickly to provide video images of the perpetrators to police, Global Payments Canada and Interac agreed to provide the TTC with a daily report of fraudulent activity at the PVMs, which ISU matched to the captured videos. The ISU identified high-incident stations and patterns in activity and met with members of the TPS Financial Crimes Unit. Surveillance of the suspects was jointly conducted on Sept. 27, 2012. The culprits hit several station kiosks and were arrested as they returned to their vehicles.

“As a result of our analysis, we predicted that on a given day, at a given time, our bandits would show up at a given station and hit the PVMs. Our predictions were accurate to within 30 minutes so we were sitting there waiting for them,” said Special Investigations Staff Sergeant Mark Russell.

Police said about 168 counterfeit debit cards and 29 TTC monthly passes were seized with five suspects arrested and charged. The investigation uncovered a group leader and a search warrant was executed. The result was the largest-ever seizure of fraudulently obtained card numbers in Toronto. An elaborate network dedicated to the compromise of point-of-sale devices across Canada was revealed, and files containing credit card data of more than 30,000 individuals were discovered.