The Board approved the TTC’s 2014 Operating, Wheel-Trans and Capital Budgets. These budgets will be forwarded to the City of Toronto for submission to the City Budget process and for confirmation of the 2014 operating subsidy level. Here is what was approved. 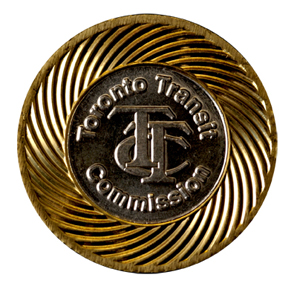 The Board approved the TTC’s 2014 Operating, Wheel-Trans and Capital Budgets. These budgets will be forwarded to the City of Toronto for submission to the City Budget process and for confirmation of the 2014 operating subsidy level. Here is what was approved:

Board Members approved expenses totalling $1.60 billion, with an assumed flat-lined operating subsidy of $411 million. To balance its budget, the TTC would need a total subsidy of $428.1 million. The TTC is projecting a record ridership level of 540 million in 2014 (2.3 per cent higher than the 528 million budgeted for 2013), while maintaining its cost-recovery rate at 73 per cent, one of the highest in North America. Based on an already agreed upon City subsidy of $428.1 million, the operating budget is still facing a $6-million shortfall.

Board Members approved a total of $1.17 billion for the 2014 portion of the 2014-2023 Capital Budget. The budget continues to provide for state-of-good-repair projects and legislative requirements (95 per cent of the total in the 10-year envelope), station and facility improvements and expansion initiatives (excludes new transit lines). The 2014-2023 Capital Budget is worth just over $9 billion.

Based on current funding assumptions, there is sufficient funding available to cover 2014 budgeted expenditures. However, the 10-year envelope for infrastructure projects and vehicle procurement and overhauls, is facing a $2.7-billion shortfall that must be addressed.

Board Members approved the 2014 Wheel-Trans Operating Budget worth $106.4 million to maintain a customer accommodated rate at 99 per cent, and to continue 24-hour service as mandated by the Accessibility for Ontarians Disability Act Transportation Standards. 2014 ridership is projected at an all-time-high 3.1 million trips.

The Board approved a report recommending a temporary bus terminal be constructed at Islington Station due to the deteriorated state of the concrete slab underneath a portion of the bus terminal. The bus terminal would have to be closed within the next three years. As a result, a temporary terminal must be built on the adjacent property. The report also requests that the City of Mississauga formally confirm by Dec. 15, 2013 that MiWay buses require space in the temporary facility beginning in 2017, and that Metrolinx provide a firm schedule for the construction of the Kipling Mobility Hub (regional bus terminal at Kipling Station).

The Board approved the award of a contract worth $19.7 million to Aecon Buildings for the Woodbine Station easier access and second exit project. Major work includes the installation of two elevators connecting the eastbound and westbound platforms to the concourse level and street level, and a second exit at the northwest corner of Woodbine Avenue and Strathmore Boulevard. Construction is set to begin in 2014 and is scheduled for completion in 2017. 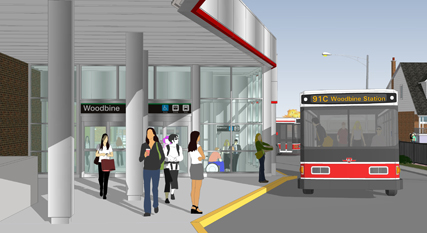 The Board approved the following motion by Commissioner Josh Colle: The TTC request that the provincial and federal governments consider providing financial support and/or incentives for TTC Metropass purchases by seniors and Ontario Disability Support Program and Ontario Works Program recipients. The motion was in response to a request for the TTC to consider further fare discounts beyond what already exists. The TTC policy on concession fares is that new or reduced concession fares will only be considered if arrangements are made to subsidize the TTC for associated revenue losses.

Board Members received an update on a request made last meeting with respect to integrating TTC and GO fares at selected GO stations. Metrolinx is currently undertaking a region-wide study of fare and service integration and that includes participation from TTC and other area transit agencies. Metrolinx is expected to report its findings next fall. The potential for pilot projects at individual stations will be considered within the context of this Metrolinx review.