CEO Andy Byford wants the city to know that the $25,000 reward for any information that leads to the arrest and conviction of the person who shot a TTC Collector last year is still on the table.

CEO Andy Byford wants the city to know that the $25,000 reward for any information that leads to the arrest and conviction of the person who shot a TTC Collector last year is still on the table.

The Toronto Police and the TTC held a joint news conference at Police Headquarters on Feb. 26, exactly one year since the shooting. Both Byford and Hold Up Squad Staff Inspector Mike Earl made another public appeal for anyone to come forward with any information that can identify the Dupont Station shooter.

“This cowardly and despicable act shocked and appalled the whole of the TTC and we want this person brought to justice,” Byford said. “I still have a member of my staff off duty who is physically better, but still psychologically traumatized by what happened.”

At approximately 7:30 p.m. on Feb. 26, 2012, the suspect, wearing a mask and brandishing a revolver-type handgun, approached the Collector Booth at Dupont Station. In what appears to have been a failed attempted robbery, the suspect began to leave, but for reasons unknown, turned back toward the booth and fired three shots into the glass, striking the Collector in the neck and shoulder. The suspect then fled through the station’s northwest exit at the corner of Dupont St. and Spadina Rd. CCTV cameras in the station captured images of the attack.

Toronto Police revised their description of the suspect. They now believe he or she is between five feet two inches and five feet five inches in height. The suspect is described as white, age 35 to 40, with a stocky build. The suspect was last seen wearing all-black clothing and a black balaclava. 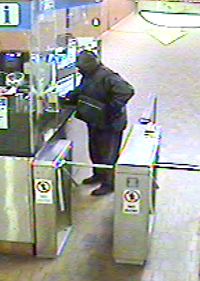 Both photos above are security camera images of the suspect in the TTC shooting investigation.