Lovely day for a streetcar ride 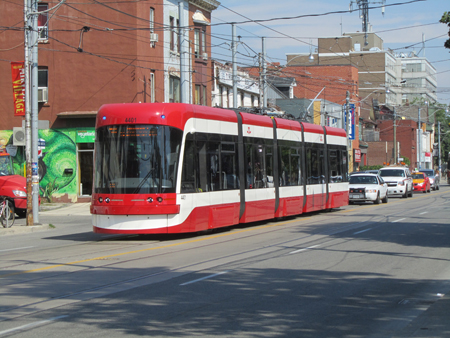 The TTC gave the media a preview ride on the third test car, which arrived on property last month. The media was taken from Hillcrest to Bathurst Station and back.

Car #4401 was operated by Maintenance Instructor Allen Boyd. LRV Curriculum Specialist Mark Knackstedt provided the media with a demonstration of the accessible ramp.

Car #4400 is presently loaded on a CP flatbed at the Hillcrest Yard spur line awaiting shipment to the National Research Council in Ottawa. All system functionalities, including heating and air conditioning on #4400 will undergo extreme temperature tests from -35 C to +40 C.

The first time the new streetcar appeared on Bathurst was a test run of #4400 on the night of March 15.