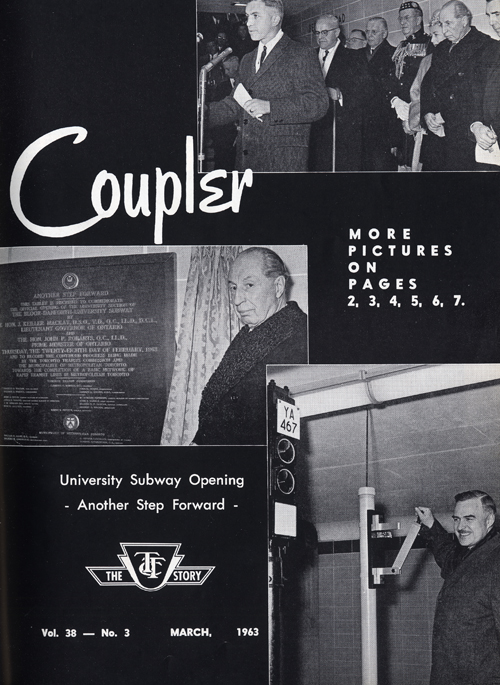 The new $45,000,000, two-mile extension of the highly successful Yonge Subway is the first step toward completion of the 10-mile, $206,000,000 Bloor-Danforth-University Subway, being built jointly by Metropolitan Toronto and the TTC.

With 6.53 miles of subway in operation, our public transit system is now capable of carrying 80,000 passengers an hour into the city’s vital core.

In effect, the new University Subway is an extension of the Yonge line from its southerly terminus at Union Station. It winds westerly along Front Street to University Avenue, thence north to Bloor Street.

Between Union Station and St George, there are five stations. Two, St Andrew and St Patrick, are named for old city wards. Museum is named for the Royal Ontario Museum above it, and Osgoode is named for Osgoode Hall.

Years of planning went into the new Bloor-Danforth-University Subway. The need for its construction was apparent even before the Yonge Subway was opened in 1954. With the exception of Yonge Street, the Bloor streetcar line was then carrying more traffic than any other route. Increased traffic congestion over the years along the entire length of Metro’s main east-west artery made it increasingly difficult to maintain satisfactory service.

In response to the Commission’s urging, the Metropolitan Toronto Council authorized a study of a subway proposal, and in 1958, functional plans and estimates were presented for a subway along Bloor Street and Danforth Avenue, from Keele Street to Woodbine Avenue; and an extension of the Yonge Subway beneath University Avenue to Bloor Street.

The project was approved by the Ontario Municipal Board on September 5, 1958 and in April 1959, financing arrangements were completed by Metropolitan Council. Later that year, on November 18th, Leslie M. Frost, then Premier of Ontario operated a power shovel to officially break the ground for the two-mile University line.

The scheduled completion date was originally set for 1969. But the Province of Ontario in June 1961 made available a $60,000,000 loan, which made it possible to build Stages 2 and 3 concurrently and to accelerate the whole job by two years.

The cost of the multi-million-dollar Bloor-Danforth-University Subway is being shared equally by the TTC and the Metropolitan Council. However, the Council is purchasing and will retain ownership of the right-of-way and the cost of easements on properties bordering the route.

The two-mile University line features a variety of types of construction. About a mile of subway was constructed by the cut-and-cover method. Cast iron tunnel liners were used in the construction of a mile-long tube section, and the Icos Method, a variation of cut-and-cover, was completed on a 162-foot test section. 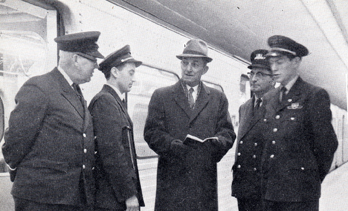 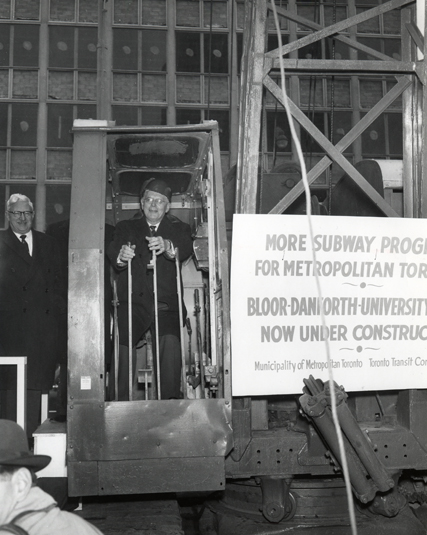 In 1959, Ontario Premier Leslie M. Frost officially started construction of the University Subway by taking the controls of a power shovel at University Avenue and Edward Street. To his right was Toronto Mayor Nathan Phillips.