The TTC welcomed rider Robert Kinsey to Queen Station on Nov. 13. The occasion was to officially recognize the long-time Metropass Discount Plan subscriber as the honourary 29 billionth rider. 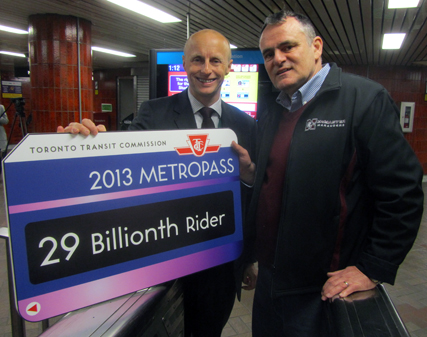 The TTC welcomed rider Robert Kinsey to Queen Station on Nov. 13. The occasion was to officially recognize the long-time Metropass Discount Plan subscriber as the honourary 29 billionth rider.

Kinsey, 61, was randomly chosen from the TTC’s nearly 50,000 MDP subscribers. TTC Chair Karen Stintz, CEO Andy Byford and Acting Chief Service Officer Chris Upfold presented the Leaside resident with a free Metropass for a year. Kinsey will take advantage of that on his most frequented route, the 34 Eglinton East bus.

With one billion customers are carried approximately every 23 months, the TTC’s 30 billionth rider is expected in summer 2015.

At 29 billion and counting, the TTC has carried over four times the world’s population since 1921, the year the TTC starting operating. The 29-billion milestone was reached on Sep. 27. On Oct. 18, 2011, Stintz congratulated the TTC’s 28 billionth rider at Davisville Station.

On one of those dates, Fri., Oct. 18, daily ridership on the average business day cracked the 1.8-million mark for the first time, according to Finance’s Ridership Report. The other three dates were Fri., Sep. 27, Wed., Oct. 16 and Wed., Oct. 30. In 2002, the TTC carried its highest-ever one-day total of 1,994,535 people at the height of the World Youth Day/Papal Visit in Toronto.

The TTC is projecting a new annual ridership record of 526 million in 2013.

At 29 billion and counting, the TTC has carried over four times the world’s population since 1921, the year the TTC was established.

Sept. 27 saw 29 billionth rider and single-day record all rolled into one

September 27, 2013: it was a Friday, sunny with a high of 19 degrees C, and somewhere on a bus or streetcar or subway train the TTC was carrying the 29 billionth customer in its history.

At 29 billion and counting, Toronto’s transit system has carried more than four times the world’s population since its inception in 1921.

With one billion customers carried approximately every 23 months, the TTC’s 30 billionth customer is expected in summer 2015.

Here are some other recent billion-rider milestone dates:

The TTC is projecting a new all-time-high ridership level of 526 million in 2013.

Last year, the TTC set an all-time annual ridership record of 514 million rides, surpassing its previous all-time total of 500.2 million set in 2011 (that was the first year ridership broke the half-a-billion mark).

TTC ridership has increased each year for the last nine years. Total ridership in 2003 was 405.4 million.

About 85 per cent of all local transit trips in the GTA are made on the TTC (or about 75 per cent if GO Transit, the regional carrier, is included). With more than 1.6 million riders on an average weekday, the TTC maintains a cost-recovery rate of more than 70 per cent from the farebox – one of the highest on the continent.

The TTC has the third largest ridership in North America, after Mexico City and New York City – cities with populations greater than eight million people.

In 2012, the TTC logged more than 219 million kilometres of service over nearly 7,500 kilometres of bus, streetcar and subway lines in Toronto and into the surrounding GTA.