Take life one day at a time advises 105-year-old

The following is a news story reprinted with permission from the Midland Mirror and reporter Nikki Cole. Originally published on Oct. 5, 2013. 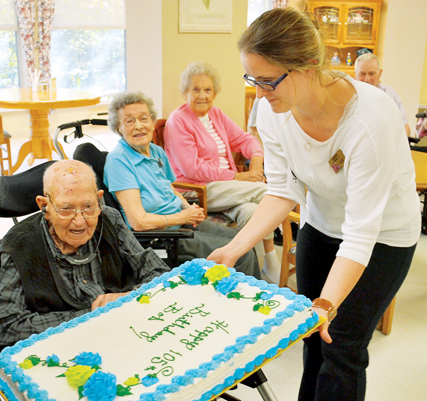 Robert Ayers celebrates his 105th birthday on Oct. 2. His daughter, Dawn Wiggins, as well as other residents of The Villa Care Centre, joined him for some birthday cake. Photo courtesy Nikki Cole, Midland Mirror.

MIDLAND – Robert Ayers celebrated a milestone this week that not a lot of people get to see – turning 105 years old.

A resident of The Villa Care Centre in Midland, Ayers was joined Wednesday by fellow residents and his daughter Dawn Wiggins, visiting from Alabama.

Born and raised near Smiths Falls, the grandfather of three has seen and done a lot in his 105 years – including serving in the Second World War with the Canadian Air Force.

After the war, Ayers worked as a diesel mechanic with the Toronto Transit Commission, moving to Waubaushene with his wife following his retirement, where he lived until only a few years ago.

The secret to a long and healthy life, he said, is simply taking it one day at a time, as well as getting enough sleep and always keeping your mind busy.
Wiggins described her father as a “sweetie.”

“He’s been very generous and loving,” she said, adding he was always a hard worker. “He built his own cottage. He always worked with his hands. He fixed anything if it was broken, and, if it wasn’t broken, he would pull it apart and fix it again.”

(Coupler note: Robert Ayers joined the TTC on Nov. 10, 1950 and retired on April 4, 1970. During his career, he worked in the Equipment Department, Parkdale Shop, as a Unit Builder and as a Dynamometer Operator.)