TTC Chair Maria Augimeri began the TTC Board Meeting by wishing the original Yonge subway line – Canada’s First Subway – a happy 60th birthday. The Yonge line opened on March 30, 1954. It was Canada’s first subway, and the first post-war subway to be built in North America. 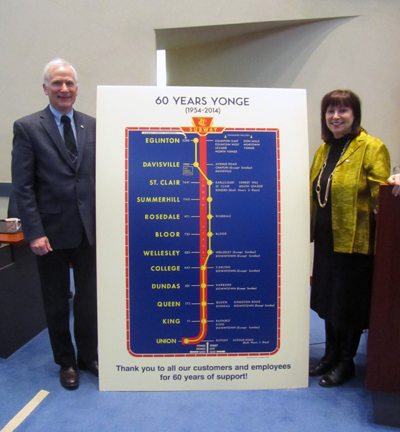 TTC Chair Maria Augimeri began the TTC Board Meeting by wishing the original Yonge subway line – Canada’s First Subway – a happy 60th birthday. The Yonge line opened on March 30, 1954. It was Canada’s first subway, and the first post-war subway to be built in North America.

The Board approved a motion by Commissioner Josh Colle directing TTC staff to report back on the feasibility of implementing additional express bus routes in the city of Toronto. In an effort to reduce congestion and provide more rapid, reliable and reasonably priced transit options, the report is to consider a number of issues, including: projected costs and revenues associated with existing express routes; an analysis of instituting peak-period express service on the top 10 busiest bus routes; and the implementation of queue jump lanes, priority signalling and dedicated lanes as ways to improve speed and reliability on existing and proposed new express routes.

The Board received a presentation on the status of the Union Precinct construction project, with an emphasis on the Union subway station second platform and concourse improvements. Union subway station has a centre platform – the narrowest platform in the system. The TTC is constructing a second platform to double the station capacity, to reconfigure the concourse level and to add a new automatic entrance. The TTC is planning to open the new platform this summer, with the rehabilitation of the centre platform happening through the summer and fall. Total project completion is scheduled for early next year in advance of the Toronto 2015 Pan Am/Parapan Am Games.

The Board approved a contract amendment worth $176.5 million with Bombardier Transportation Canada Ltd. for the purchase of 10 additional six-car subway train sets.

To meet existing service standards for ridership and reduce crowding on Line 1 (Yonge-University-Spadina), five trains are required for service on the line upon completion of the Automatic Train Control project. An additional five train sets are also needed to meet future ridership growth on Line 1 until the next subway train set purchase in 2025.

After hearing numerous deputations from east-end residents for a new Community Bus route, Board Members approved a report recommending a hold on any routing changes or new service additions to the network pending the completion of TTC staff’s plan to more effectively integrate Wheel-Trans and conventional TTC services. The plan is scheduled to be presented in early 2015.

In December 2012, the City of Toronto Auditor General provided a report to the Board that included a recommendation “that the Commission request the Chief Executive Officer to re-assess the need for the existing Wheel-Trans Community Bus routes, and cancel or develop alternate routes to ensure the services are cost-effective.”

Community Buses carry 30 to 60 riders each day, or a total of about 230 passengers daily on all five routes.

The Board received for information the TTC Community Relations Annual Report.

The community outreach on major TTC construction projects has ensured that community questions, concerns and recommendations are clearly identified, evaluated and responded to throughout planning, design and construction. The TTC Community Relations team is a bridge between communities, TTC construction staff and contractors.