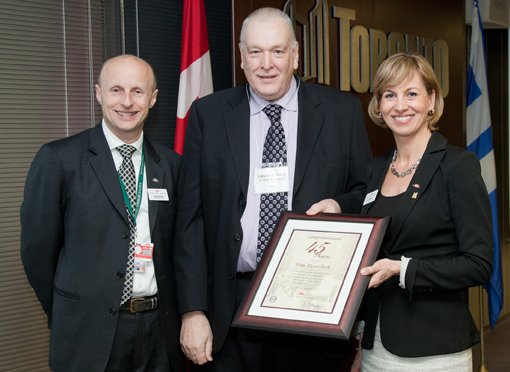 Rail Cars and Shops’ Frits Heemskerk (now retired) was congratulated on 45 years of service with the Commission by TTC Chair Karen Stintz and CEO Andy Byford.

Board members also directed staff to consider implementing a time-based transfer system as part of the 2015 operating budget; end the time-based transfer trial on the 512 St Clair route if a TTC-wide time-based system is not adopted in 2015; and define a policy for use during times of significant disruption due to new transit construction.

The TTC report estimates that a transfer valid for 120 minutes would result in a $20-million revenue loss versus a 90-minute transfer, which would equate to a $12-million loss. Either option would require ongoing subsidy to make up for these losses.

The report was prepared in response to a request last December made by TTC Chair Karen Stintz to review the current transfer policy with the introduction of the Presto fare card system at the TTC.

The Board discussed a staff report on the subject of improving pedestrian safety and customer journey times with respect to TTC bus and streetcar stops. Board Members voted to refer the subject for consultation with affected Councillors and the Advisory Committee on Accessible Transit and report back at the February Board meeting.

Board Members approved the award of contracts worth $120 million to Associated Toronto Taxi Cab Co-operative Ltd., Checker Taxi, Royal Taxi Inc. and Scarborough City Cab for new accessible taxi services. The contracts take effect in July and will ensure continuous and reliable Wheel-Trans service to registered riders with physical disabilities for the next five years.

The TTC Board approved a trial of a new off-peak service on the 79B Scarlett Rd branch (Runnymede Station to Lawrence Avenue and Jane Street, via St. Clair Avenue West). Starting on March 30, buses will run during the weekday middays and early evenings from Monday to Friday, and during the daytime on Saturdays, Sundays and holidays. The 79 Scarlett Rd bus route links Runnymede Station with the Scarlett Road neighbourhood in the west end of Toronto. The adjustment is expected to improve overall service for customers.

Board Members approved a motion by Commissioner Raymond Cho for TTC staff to report back on the feasibility of having TTC express buses stop at GO rail stations where they intersect. One such example where this type of service improvement is possible is at Milliken Station.

Requests from the Chair

The Board approved two requests for staff reports from by TTC Chair Karen Stintz on the following: 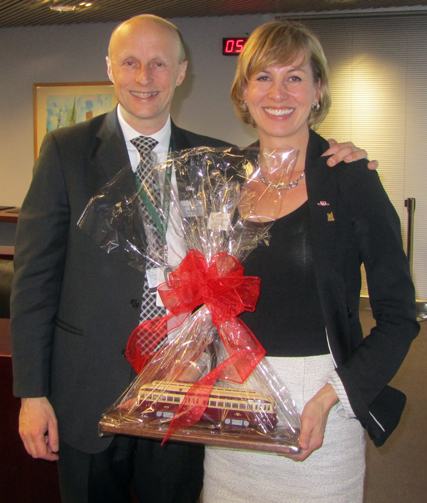 CEO Andy Byford presented TTC Chair Karen Stintz with a model PCC streetcar on concluding her last meeting as Chair. Stintz is stepping down on Feb. 22. City Council will select her replacement on Feb. 19.
X
Cookies help us improve your website experience.
By using our website, you agree to our use of cookies.
Confirm