Articulated buses made their debut on the 29 Dufferin route on March 10. 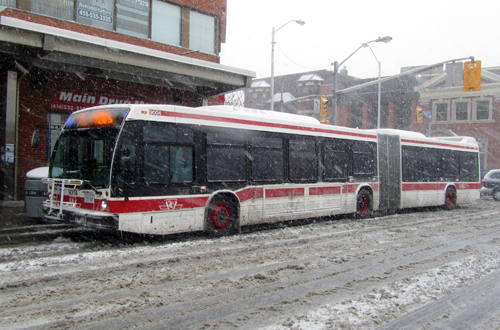 Articulated buses made their debut on the 29 Dufferin route on March 10.

About 20 of the accessible 60-footers (18.3 metres) are now running in service on the Bathurst and Dufferin routes. Artics made their return to revenue service last December after a 10-year absence from Toronto streets. And judging from the photo below (taken this afternoon at Dufferin and Bloor) old man winter made his return to the city as well.

Other routes that are scheduled to see articulated service this year will be: 6 Bay, 63 Ossington, 36 Finch West, 53 Steeles East and 85 Sheppard East. Currently, all artics in the fleet are running out of Wilson Garage.