PRESS FOR EMERGENCIES ONLY

The TTC and emergency responders have a pressing message for subway riders: if you’re reaching for the train’s yellow emergency strip, think of it as a 9-1-1 call. 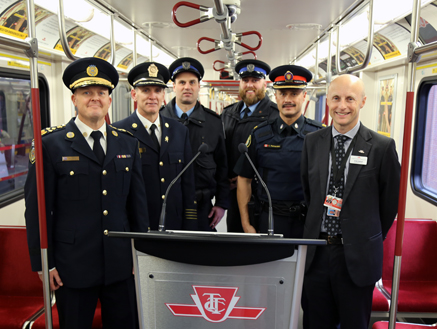 The TTC and emergency responders have a pressing message for subway riders: if you’re reaching for the train’s yellow emergency strip, think of it as a 9-1-1 call.

When the yellow Emergency Alarm is pressed, an audible alarm sounds in the car, the train crew contacts Transit Control and a Dispatcher calls for firefighters, police or paramedics. The response is swift and intense.

Too often is the case that emergency responders are attending a non-emergency situation. Between Jan. 1-Nov. 22, 2014, the Emergency Alarm was activated nearly 2,700 times, resulting in close to 120 hours (or about five days) of subway delays. While 851 emergency activations (i.e. serious illness or security) resulted in 4,266 minutes of delays, 1,826 non-emergency activations caused 2,885 delay minutes. The Emergency Alarm was pressed in error more than 1,200 times.

“If there is a genuine emergency that requires the presence of fire, police or paramedics, the alarm should be used,” Byford said. “If, however, you feel faint, or if there is some other non-emergency situation, we ask you to exit the train so that we can provide the assistance you need at a station without bringing service to a halt. If in doubt, press the Emergency Alarm and train crews will call for emergency responders.”

The Emergency Alarm (previously called Passenger Assistance Alarm) is available on all subway and SRT trains. Riders can press the familiar yellow strips in the event of an emergency. Its misuse can result in a $500 fine.

An explainer video about the Emergency Alarm, and the Emergency Power Cut at the end of each platform, can be viewed at the TTC’s YouTube channel at YouTube.com/OfficialTTCchannel.