The TTC Board received a report outlining the schedule and budget changes required for the Toronto-York Spadina Subway Extension (TYSSE) and approved the following action. 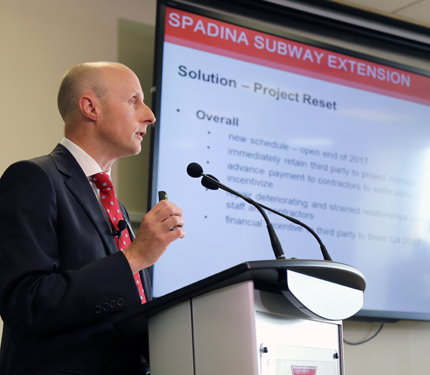 CEO Andy Byford provided a technical briefing on the Spadina Subway Extension to the media on March 20, 2015.

The TTC Board received a report outlining the schedule and budget changes required for the Toronto-York Spadina Subway Extension (TYSSE) and approved the following action:

Commissioners also directed that the TTC CEO provide a report by the fourth quarter of 2015 outlining the specific, substantive changes that will be made in the planning and project management for the Scarborough Subway as compared to the TYSSE. The report will be forwarded to the City of Toronto and the Regional Municipality of York. On March 31, City Council voted in favour of the necessary funding requirements.

Expansion of the Express route network was included in the Opportunities to Improve Transit Service in Toronto report approved by Commissioners last August. The TTC currently runs Express bus services on 23 routes during the peak periods, Monday to Friday, and seven routes during off-peak times.

In early 2014, the Board approved a motion by then Commissioner Josh Colle directing TTC staff to report back on the feasibility of implementing additional express bus routes across the city. In an effort to reduce congestion and provide more rapid, reliable and reasonably priced transit options, the report would consider: projected costs and revenues associated with existing express routes; an analysis of instituting peak-period express service on the top 10 busiest bus routes; and the implementation of queue jump lanes, priority signalling and dedicated lanes as ways to improve speed and reliability on existing and proposed new express routes.

Board Members approved a status report on the 2014-2018 Accessibility Plan. Key initiatives remaining in the plan are underway and scheduled for completion by 2018, including:

The Board also requested staff to report back on its second quarter strategies to further improve standards related to Wheel-Trans telephone trip bookings. The status report notes that accessibility retrofits at 13 subway stations are currently not funded due to a $164-million shortfall in capital funding. The City-TTC Transit Funding Task Force continues to seek reinstatement of full funding for the TTC’s Easier Access (accessibility) program. The status report will be forwarded to the City of Toronto, the Ontario Ministry of Economic Development and the Ontario Human Rights Commission.

One person train operation is a technological change that removes the need for a Guard and makes the Operator responsible for door monitoring and operation.

The Board approved a contract change worth a total authorized expenditure of $81.8 million to Alstom Power Transport Canada Inc. for the design and supply of radio-based Automatic Train Control system for Line 1 (Yonge-University) and the Toronto-York Spadina Subway Extension. The change consolidates signalling contracts under the one supplier. The change is effective no later than March 31, 2015.

The approved budget for the replacement of the existing 60-year-old signalling system and installation of Automatic Train Control on Line 1 by 2020 is $562.8 million. Consolidating contracts will reduce construction costs, reduce testing and commissioning activities and reduce the number of subway closures required. The overall cost of the contract remains the same as savings are made through less integration required, less track-side equipment, fewer closures and cancellations of contracts with Ansaldo-STS Canada Inc.

The next scheduled regular TTC Board meeting will be on Wednesday, April 29 at Toronto City Hall, starting at 10 a.m., with the public session starting at 1 p.m.