Over 100 streetcars running with PRESTO 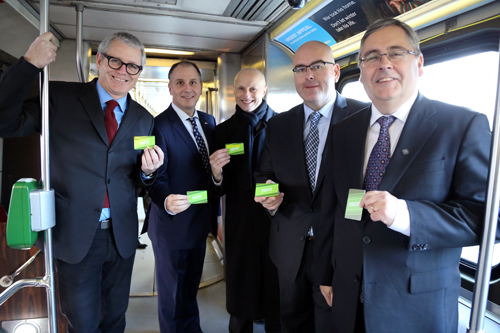 The remainder of the fleet of CLRVs and ALRVs is scheduled to go live before year’s end. The TTC’s new streetcars enter service with card readers already activated. More than 3,000 riders tap to board streetcars each week.

“PRESTO is making transit more modern, convenient and seamless for commuters,” said Del Duca. “Close to 1.8 million PRESTO cards are in use across the GTHA and Ottawa.”

PRESTO is currently in use at 26 subway stations. The remaining stations, and the entire bus fleet (including Wheel-Trans) is scheduled to have PRESTO in use by the end of 2016.

PRESTO Add Value machines are now in 23 of those 26 stations. These self-serve reload machines allow customers can replenish their smart cards and check their balances and transaction history.

“The TTC is committed to enhancing fare payment options for our customers,” said Colle. “By adding PRESTO to our legacy streetcar fleet, we’ve made it easier for our riders to take the TTC.”

Metrolinx announced that a six-month pilot began this week to sell pre-loaded PRESTO cards at some Gateway newsstands in the subway, and PRESTO cards will soon be expanded to more TTC pass-vending machines. Roughly 300,000 TTC riders tap on the subway each week.

Proof of payment (POP) and all-door boarding on all 11 streetcar routes began this week.