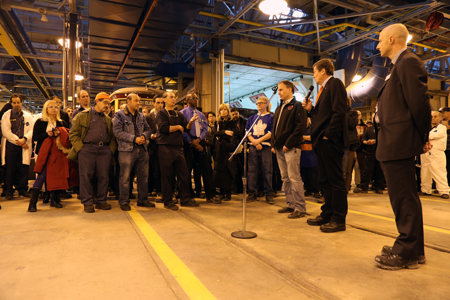 Mayor John Tory takes questions from employees on the shop floor on Feb. 9.

The Mayor got an up close and personal look inside Harvey Shop and came away with an appreciation of the skill sets involved in maintaining the TTC’s massive fleet of buses and streetcars in a state of good repair.

Tory, along with TTC Chair Josh Colle, discussed the $95-million worth of new and enhanced services that are being proposed in the 2015 TTC budgets, including 50 new buses and hundreds of operating and maintenance jobs. Council approves the city’s budgets in March. Tory also encouraged his audience to contact their Toronto Councillor and urge them to support the budget and the transit service investments being proposed.

“We all know that governments over the years, at all levels and of all stripes, have postponed decisions about public transit in this city to the point where congestion has started to strangle the city,” Tory said. “And now is the time for us to begin to make up for that neglect.”

The Mayor and Chair faced numerous stiff questions about contracting out jobs, privatization, transit expansion and his Smart Track proposal.