A loud cheer erupted from Joyce Public School in North York on Jan. 19 when Toronto Mayor John Tory and TTC Chair Josh Colle announced that children 12 and under could be riding the TTC for free starting on March 1. 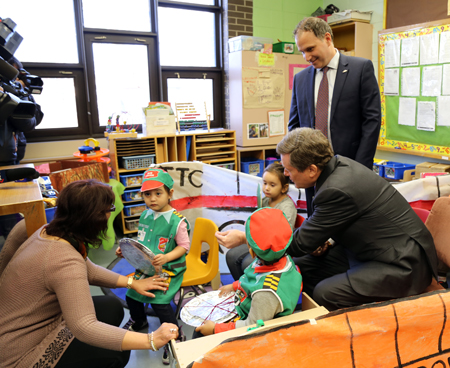 A loud cheer erupted from Joyce Public School in North York on Jan. 19 when Toronto Mayor John Tory and TTC Chair Josh Colle announced that children 12 and under could be riding the TTC for free starting on March 1.

The Mayor and Chair unveiled a $95-million investment plan for the TTC “that is long overdue and absolutely necessary for the social and economic well-being of our city,” Tory said.

The plan proposes to restore service to 2011 levels to reduce wait times and crowding, and make riding more affordable for families.

“This is about building a great future for this city and for children across the city, and building a great future starts with ensuring our ability to get around the city,” Tory said. “What you’re seeing today is a reasonable increase in fares accompanied by a very significant increase in service. TTC users will pay a little more and get a lot more.”

Along with a 10-cent proportionate hike in fares (excluding Cash fare) effective on March 1, the Mayor and Chair are recommending the City increase the TTC operating subsidy to $479 million in 2015, a portion of which will help fund the following initiatives:

“This critical investment in TTC service is a significant step in making transit service more attractive and accessible for all Torontonians, and addressing issues that current transit users have told us time and again that they face everyday,” Colle said.

Details on the introduction of these improvements, including the purchase of 50 new buses to deliver the service and a temporary bus storage facility, will be brought forward in a report to the TTC Board at its special budget meeting on Feb. 2, and then City Council for final approval.

Last August, the Board unanimously approved in principle a service improvement report entitled, Opportunities to Improve Service in Toronto, which outlines nine bus and streetcar service initiatives that could be implemented in the short- to medium-term.

On Jan. 16, Metrolinx and the TTC announced one-year fare integration pilot on GO’s Lakeshore line. Starting in February, TTC Metropass holders can purchase a $60 sticker for their monthly pass that will give them a discounted rate for train travel from GO’s Exhibition and Danforth stations to Union train station.

Metropass users could realize a 65-per-cent discount on the regular cost of using GO, and a 10-to-15-minute reduction in commute times. GO Transit starts selling the sticker on Jan. 26.

“Being able to use GO service at a discounted rate means we are providing a convenient and affordable option to customers who – like all TTC riders – just want to get to home and work quicker,” said TTC Chair Josh Colle.

In 2013, the TTC Board requested TTC staff to work with Metrolinx to explore integrating TTC and GO fares at selected GO stations.