With Eglinton Division as a backdrop, and a day after City Council approved Toronto’s budgets, Mayor John Tory and TTC Chair Mike Colle declared on March 12 “this city budget is a transit budget” with the most significant investment in the TTC in recent memory. 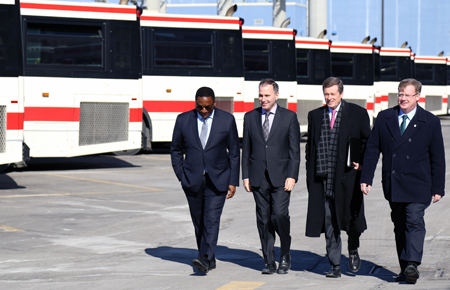 With Eglinton Division as a backdrop, and a day after City Council approved Toronto’s budgets, Mayor John Tory and TTC Chair Mike Colle declared on March 12 “this city budget is a transit budget” with the most significant investment in the TTC in recent memory.

The City budgets were approved by a 42-2 Council vote on March 11, which included $90-million for the TTC to enhance service and reduce wait times and overcrowding.

“With this budget we’re going to get Toronto moving, we’re going to put families first and we’re going to keep taxes low all the while maintaining the city’s fiscal health,” Tory said. “Families will have more money in their pockets with a property tax below the rate of inflation and kids riding free on the TTC.”

Here’s how the additional funding will enhance services for TTC riders:

“These are investments and improvements to the service that customers will see nearly immediately and over the course of the year,” Colle said. “This budget signifies the commitment in public transit and commitment in the TTC.”

The following news release was issued by the City of Toronto on March 11, 2015:

Toronto City Council has approved the 2015 rate and tax supported operating budget of $11.4 billion and 10-year capital budget and plan of $31.7 billion. The 2015 budgets make significant investments in key strategic priorities for the City’s future, including transit, poverty reduction and public safety. The budget continues to strengthen the City’s fiscal health and for the third year in a row, the budget was balanced without the use of the prior year’s surplus.

“Today, City Council approved a budget that is focused on getting Toronto moving, putting families first and keeping taxes low,” said Mayor John Tory. “This budget makes important new investments in services and infrastructure, while keeping the residential budget tax increase at 2.25% – less than the rate of inflation – which will help Toronto families.”

“This fiscally prudent budget balances the need to invest in our city, while keeping property tax increases to a minimum,” said Councillor Gary Crawford (Ward 36 Scarborough Southwest), Chair of the City’s Budget Committee. “As we’ve shown in this process, we will continue the disciplined approach to balancing the budget in 2016.”

Residents will pay an additional 0.5% to fund the Scarborough Subway. As part of the City’s overall strategy to enhance Toronto’s business climate, there will be an additional increase of 0.45% for residential properties. Therefore, the total municipal tax increase is 3.2% or $83.19, which means the average house assessed at $524,833 will pay $2,679 in 2015. The total tax increase for non-residential properties, which includes rental apartments, is 0.48%.

The budget also includes a strategy for the City to permanently deal with the loss of the revenue to fund social housing in a responsible and prudent manner. This strategy will spread the budget impacts of the funding shortfall over the next four years to allow time for the City to identify budget adjustments and to mitigate costs. For 2015, this means an additional $25 million in budget savings with no impact to City services.

“The major investments that are outlined in this year’s budgets align with the City’s strategic actions by providing additional funding to improve the city’ s transportation network, reduce poverty and strengthen our emergency services, while maintaining the City’s fiscal health,” said Rob Rossini, Deputy City Manager and Chief Financial Officer.

The 2015 Operating Budget maintains all current programs and services and provides funding for new and enhanced services, including:

Toronto Water’s rate supported budget focuses on providing high quality drinking water and wastewater services while dealing with the impact of extreme weather, aging infrastructure and the need to provide ongoing customer service enhancements. City Council approved an 8% water rate increase as of March 13, which equates to a 6.5% increase for 2015 (a $54 increase compared with 2014 for the average Toronto household using 280 cubic metres). The 10-year $11 billion capital plan includes more than $8.2 billion in spending on state of good repair, basement flooding protection, storm water management and improving the City’s resiliency to extreme weather./p>