The TTC Honour Guard marched in the Thank You Canada Dutch Liberation Parade in celebration of the 70th anniversary of the liberation of the Netherlands recently. 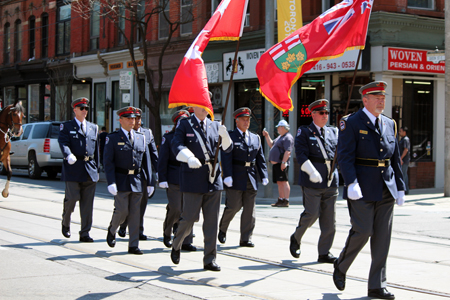 The TTC Honour Guard marched in the Thank You Canada Dutch Liberation Parade in celebration of the 70th anniversary of the liberation of the Netherlands recently.

May 8, 2015 is the 70th anniversary of Victory in Europe (VE) Day, which marks the end of the Second World War.

The TTC has a long and rich history of military service. During the WWII, more than 600 Commission employees enlisted for service. Those names are remembered on the TTC’s Honour Rolls, along with a dozen of them who were killed in action. Over the 94-year history of the Commission, more than 100 TTC families have been the recipients of the Memorial (Silver) Cross presented for sons, daughters and family members lost at war.

TTC letters from the war

Employees and pensioners may be interested in a new book called, Love in the Air: Second World War Letters, written by Joanne Culley, an award-winning writer and video producer. Culley’s mother, Helen Reeder, worked at the TTC’s Davenport Division during the war and shared her experiences with her husband, who was overseas, through a series of letters during the war. Check out an earlier online version of the book here with a photo of Helen Reeder and friends sitting behind Davenport Garage at Hillcrest.