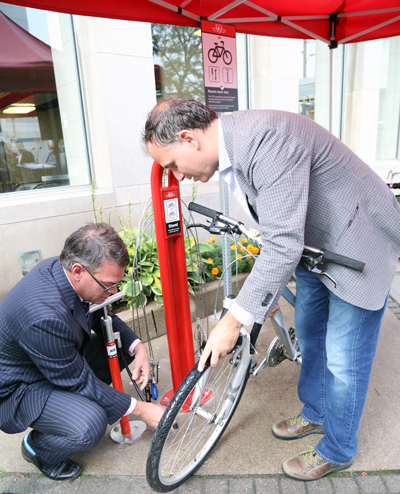 “TTC customers arrive at the TTC in a number of ways: by car, by foot, by taxi and by bike. These new repair stands are going to make it easier for our riders to complete the first and last miles of their trips,” Colle said.

The self-service stands, installed by Plant Maintenance, are equipped with a variety of hand tools, a bike pump and a wheel chock for minor repairs.

Spearheaded by Customer Development staff, subway stations were chosen based on a number of criteria, including: existing bike parking, bike routes and trails in the surrounding neighbourhood and available space. The 10 stations with stands are: Bathurst, Davisville, Downsview, Dupont, Finch, Kipling, Keele, Kennedy, Pape and Spadina.

The TTC and the City’s Transportation Services Division have worked jointly for decades to integrate cycling with public transit through numerous initiatives, such as: