As a former Edmonton bus operator, Amarjeet Sohi, the new Federal Minister of Infrastructure and Communities, is no stranger to the critical, behind-the-scenes work that goes on at facilities such as Harvey Shop. 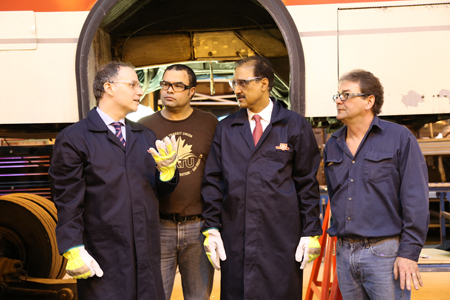 As a former Edmonton bus operator, Amarjeet Sohi, the new Federal Minister of Infrastructure and Communities, is no stranger to the critical, behind-the-scenes work that goes on at facilities such as Harvey Shop.

He had great praise for TTC shops employees as he toured Harvey this morning (April 7) with TTC Chair Josh Colle, CEO Andy Byford, TTC Commissioners and a large contingent of Toronto MPs committed to providing the funding necessary to keep transit buses and streetcars rolling smoothly and safely in cities across Canada.

“Harvey Shop and the people that work here showcase the important work that Toronto is doing to keep the transit fleet, the largest in the country, in good shape,” he said.

Sohi restated the first phase of funding unveiled in the Federal Budget on March 22, which was up to $3.4 billion over three years to upgrade and improve public transit systems across Canada. For the TTC, that means hundreds of millions of new dollars for continued state of good repair. He emphasized that the funding will now be allocated on the basis of ridership to support the largest systems that have not been able to start essential state-of-good-repair projects due to a lack of funding.

Last November, the TTC Board approved a total of $1.17 billion for the 2016 portion of the 2016-2025 Base Capital Budget. The budget continues to provide for state-of-good-repair projects and legislated requirements (92 per cent of the total in the 10-year envelope). But over the next five-year period, the TTC is facing an $873-million shortfall; and over the total 10-year-period the shortfall grows to $2.8 billion. The federal funding will make a big dent in that shortfall.

“With TTC ridership and our capital backlog at record levels, investing in Toronto’s existing transit network is critical,” Chair Colle said. “The TTC experiences far too many delays caused as a result of aging infrastructure and the inability to start state of good repair projects that are overdue and unfunded.”

Chair Colle added that he is encouraged that the federal government has left it to municipalities to determine their priorities and that funding allocations to cities will be based on ridership.