The TTC paid tribute to a long-time neighbour and Toronto landmark on Nov. 1 – Honest Ed’s. The famous discount store shuts its doors for good in December. 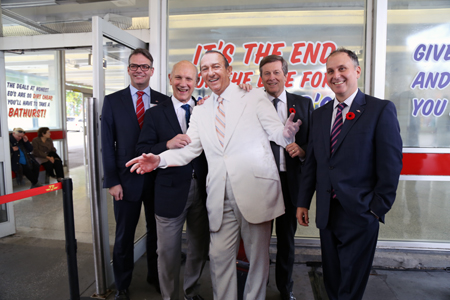 Signs of the time

The TTC paid tribute to a long-time neighbour and Toronto landmark on Nov. 1 – Honest Ed’s. The famous discount store shuts its doors for good in December.

Bathurst Station, steps from Honest Ed’s, was dressed for the occasion with iconic bright red painted signs as Toronto Mayor John Tory and TTC Chair Josh Colle hosted David Mirvish in a celebration of the cultural impact the Mirvish family has had on the city.

“What we’re doing is commemorating the long history of the Honest Ed’s store and the Mirvish family in this neighbourhood,” Tory said. “The store was here before the subway was here, and when the streetcar line came along Bloor Street. It has stood as a landmark for Torontonians – a place where they could come knowing that they would be welcomed and embraced. It epitomized the spirit of inclusivity, which is what makes Toronto so special.”

Everyone could find a witty sign or a great bargain at Honest Ed’s, including the mayor.

Tory lauded the late Ed Mirvish’s contribution to the city’s arts and theatre scene. The late Mirvish revitalized King Street West when he bought a rundown Royal Alexander Theatre and restored it to its original beauty. He built the Princess of Wales Theatre on King Street West, which opened in 1993. He also transformed the Pantages Theatre on Victoria Street, and now named the Ed Mirvish Theatre.

Mirvish said he was overwhelmed by the tribute and spoke of the many waves of immigrants from all walks of life that the famous landmark has welcomed through its doors.

“We first came with a small 200 square foot store to this corner in 1941. So we will have been here for 75 years, which is half the history of this country. The store isn’t only a store, but an opportunity to fulfill a dream.”

Mirvish was surrounded by suppliers who have been with him since 1958 and employees who worked for the bargain store for more than 50 years.

Signage in the iconic Honest Ed’s font are featured inside and outside the station. At the concourse level, a permanent display honouring the Mirvish name has been erected. Platform walls are also decorated with fun facts about Honest Ed’s. And this month, customers can purchase the monthly Metropass featuring Honest Ed’s famous storefront sign.

“As someone who grew up near Bathurst and spent a lot of time on the Bathurst bus, Honest Ed’s has always been a part of the fabric of this neighbourhood and the city as a whole,” Chair Colle said.

TTC employees worked diligently overnight to transform the station. The installation will remain on display until the end of the year. Here’s a video sneak peek of the transformation. An extended version will be posted later this week on the TTC’s YouTube channel. 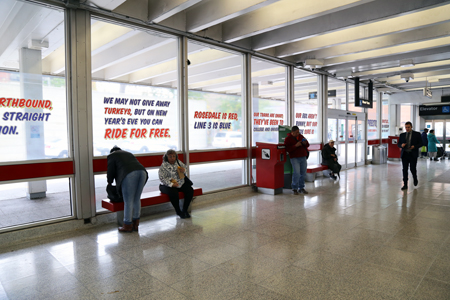