Building transit is the best way to fix traffic: Tory

Toronto Mayor John Tory was at the future York University Station on Nov. 28 to restate his case for tolls as tools to fund transit and transportation infrastructure. 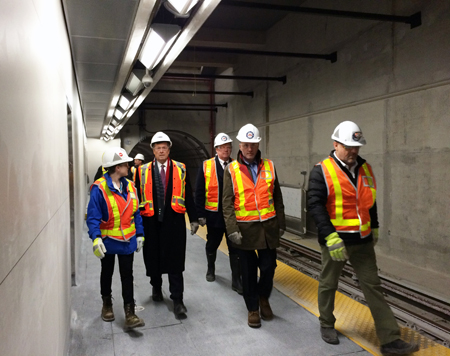 Toronto Mayor John Tory was at the future York University Station on Nov. 28 to restate his case for tolls as tools to fund transit and transportation infrastructure.

Accompanied by TTC Chair Josh Colle and Budget Chair Gary Crawford, the trio descended an emergency exit to track level before returning to the surface to reaffirm their commitment to building and funding TTC services.

A road toll on the city’s two busiest highways, as first proposed by the Mayor during his speech to the Toronto Region Board of Trade on Nov. 24, would boost capital investment for essential transit and transportation infrastructure.

“The traffic has grown worse and worse and worse. It is bad for the economy and a crisis for families and not consistent with a liveable city. Imagine what it will be like 20 years from now when one million more people will be living in Toronto. Building transit is the best way to fix traffic.”

Mayor Tory added that the TTC has an ambitious schedule for repair and renewal and expansion of the system and the Federal Public Transit Infrastructure Fund (PTIF) is a huge opportunity for this city. Included in that is the purchase of more than 750 new TTC buses and up to 120 Wheel-Trans buses over three years.

“We are partnering well with the new Government of Canada on an unprecedented amount of funding to address the state of good repair of the TTC. Over the next two years, the federal government has provided up to $840 million for this work,” he said. “We have to come up with our matching $840 million in order to get their $840 million.”

The Federal PTIF announced last May is covering 50 per cent of the cost of eligible TTC projects, with the City of Toronto providing matching funds (retroactive to April 1, 2016).