Public art on the way

The TTC Board approved art concepts at the following seven stations at its meeting on July 12. 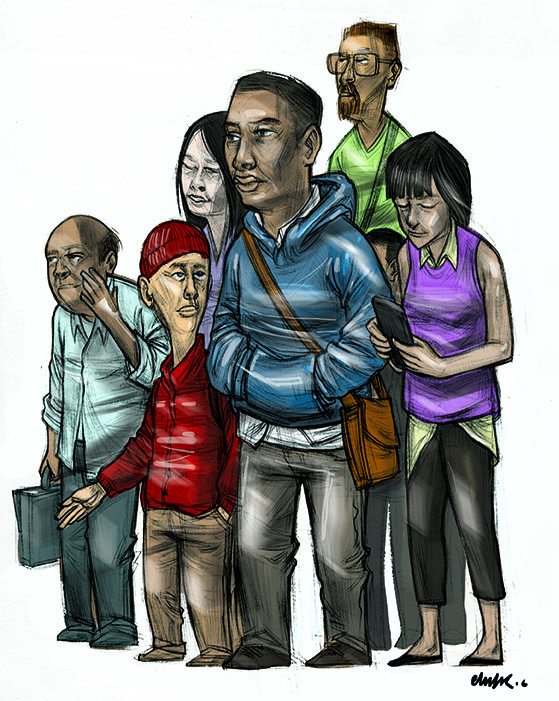 The TTC Board approved art concepts at the following seven stations at its meeting on July 12:

The artwork is consistent with the TTC’s Art in Public Transit Facilities policy and will be installed during the easier access and second exits construction schedules that begin in 2017 and 2018.

FLORAE is a series of wall mosaics and art glass elements that serve to reflect the community that inhabits the Chester subway neighbourhood. The area is full of parks and green spaces, and the residents take pride in their gardens. Inspired by native plants and flowers of the area, the artwork draws from the sugar maple, eastern cottonwood, butternut tree, yellow coltsfoot flower and red skunk cabbage, among many other species. Shifting and cascading hues depict the florae in changing seasons. 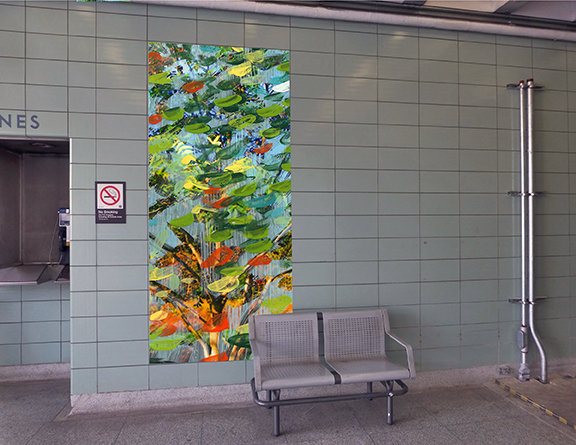 Light Canopy is an animated lighting system set into the ceiling above the stairwell at King Station’s western entrance. As pedestrians pass under, they will experience the feeling of being under sun-dappled trees, with beams reflecting and passing through foliage. The dynamic, animated band of light is made up of an array of programmed LEDs spanning the underside of a diffusing semi-translucent surface. Light Canopy will be programmed to follow natural circadian light cycles. The artwork will be continually changing; a piece that the public will get to experience in new ways each time they see it. 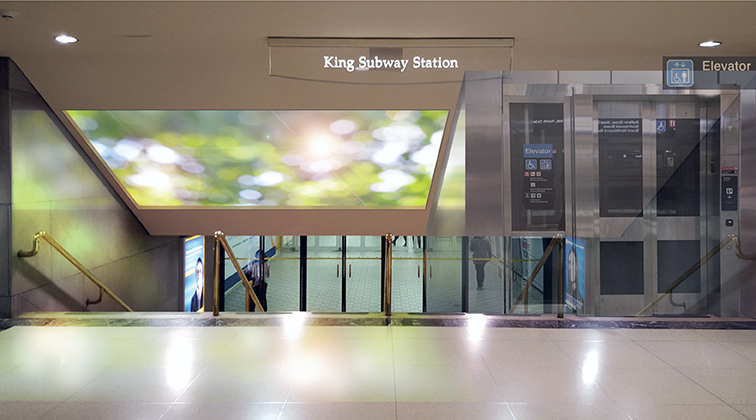 Anonymous Somebody captures the snippets of bustling Bloor West Village lives while standing still. The artwork aims to communicate the story of individual spirit as fresh and relevant to the metabolism of the neighbourhood. The images work as an anchor to a thought or memory for the person viewing it – to commemorate, celebrate, provoke and heal. Not unlike Runnymede, a house that became a community, Anonymous Somebody welcomes all passengers to reframe the characters’ experience as they pass or wait, fluidly transitioning from past lives to present, making the artwork their own. 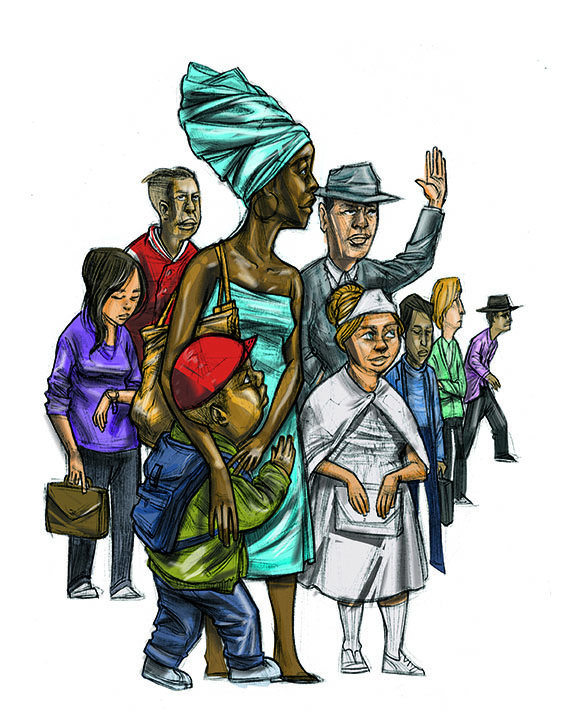 Whole is Greater than the Sum of its Parts. The mosaics offer a friendly invitation to all people in the universal language of colours and geometric triangular patterns. The proposed artwork will be a series of colourful mosaic wall panels based on patterns derived from local community workshops. This project conceptually embodies the interdependence of parts within the whole. The panels will be fabricated from custom ceramic tiles, and applied at various locations throughout the station. Sherbourne Station is an important transit hub for the multicultural neighbourhoods it serves and this proposed artwork intends to reaffirm the station as a shared place where the wider community interacts daily. 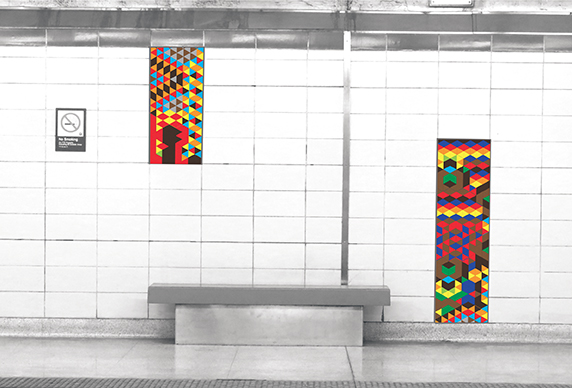 Many Little Plans will consist of over 400 ceramic tiles installed within the alcoves of the subway platform. Every tile will portray the silhouette of a person, each with his/her unique pattern. Photographs of local residents and the station’s users, taken with full participation of the subjects, will be inserted throughout the artwork. Many Little Plans will be a compendium of ages, genders, ethnicities and walks of life, reminding viewers of the vibrant diversity of Toronto’s urban population. Jane Jacobs, Toronto’s revered urban activist, advised, “Make many little plans” as a key ingredient for the creation of a healthy urban environment. 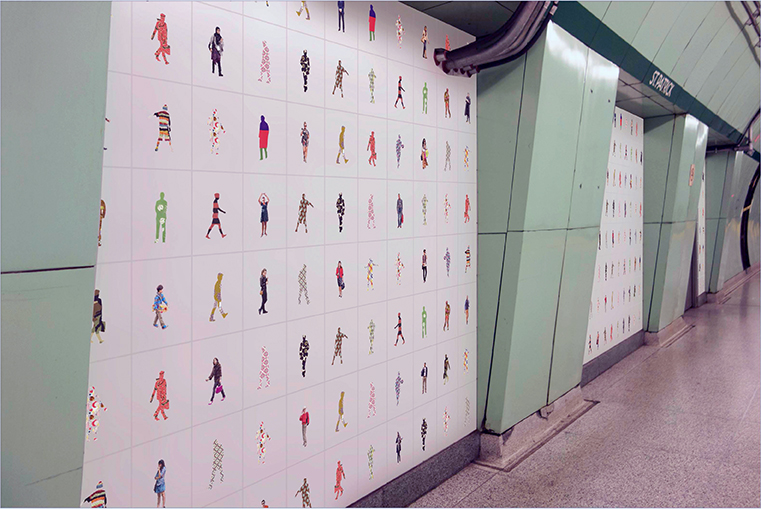 Outside the Lines is born of the language and materials of the subway system and Wilson Station’s surrounding community. Taking the omnipresent steel handrail tube, Outside the Lines transforms this simple material into an interactive sculpture and wayfinding device. The installations are formed from durable, powder-coated steel tubes mounted to various surfaces throughout the site. In addition to the enhancement and animation of the new work, the piece provides both amenity and wayfinding for Wilson Station. Complementing the physically interactive environment of Wilson Station through a similarly tactile artwork is an integral component of Outside the Lines. 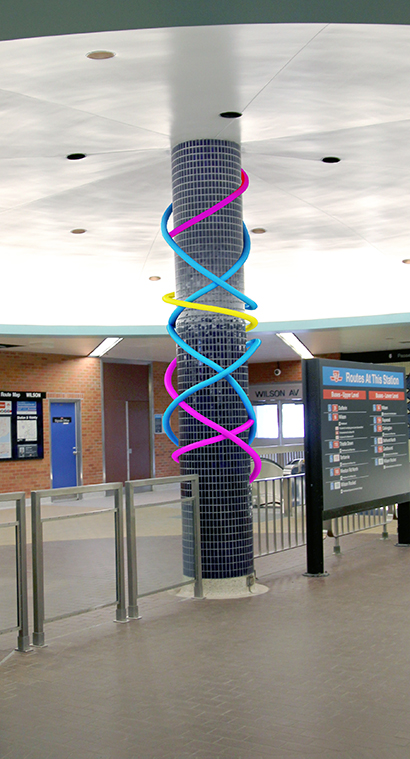 Directions Intersections Connections is a vibrant relief mural to be installed on the north-facing wall of the Woodbine Station Bus Platform. The mural refers to the covering of distance depicted as time and transport – fashioned with bright hues and graphic patterns. The artwork pursues the visual means by which a project can appear abstract and yet simultaneously offer a composite narrative. At over 1,000 square feet, the brightly coated metal panels of the mural express the motion and directional routes of transit, the intersections of communities and place, and the connections of site to both the present and the past. 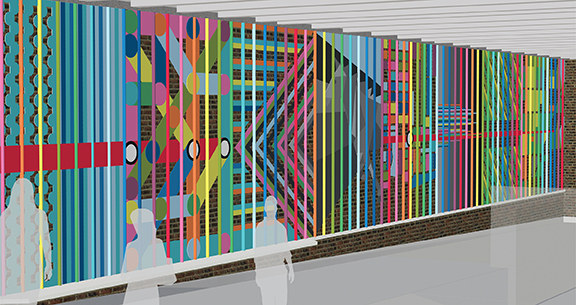