With Operators logging nearly 240 million kilometres over a service area of 632 square kilometres for Toronto, it doesn’t take the TTC too long to rack up one billion boardings. 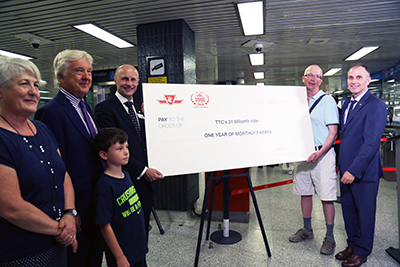 With Operators logging nearly 240 million kilometres over a service area of 632 square kilometres for Toronto, it doesn’t take the TTC too long to rack up one billion boardings.

This past June, and less than two years after the TTC hit the 30-billion plateau, somewhere on the system the TTC welcomed its 31 billionth customer since 1921. To officially celebrate the occasion, TTC Chair Josh Colle and CEO Andy Byford presented randomly selected Metropass Discount Plan subscriber, James White of Toronto, with a year’s worth of complimentary monthly passes at Osgoode Station on July 12.

The Finance Department’s Ridership Report confirmed the milestone was set on Thursday, June 15. The 32 billionth rider is projected to arrive in the spring of 2019.

Last year, the TTC set an all-time record of 538.1 million rides, surpassing its previous record total of 537.6 million in 2015. TTC ridership has now increased each year for the last 13 years and has been well over the half-a-billion-a-year mark since 2011. Nearly 85 per cent of all local transit trips in the GTA are made on the TTC.

With more than 1.7 million customers on an average weekday, the TTC has the third largest ridership rate in all of North America, after Mexico City and New York City where populations exceed eight million.

After 95 years in service – and at 31 billion customers carried – the TTC has grown to become one of the most visible and vital public service organizations in the Greater Toronto Area. Here is a list of billion-rider milestone dates since 2005:

June 15 saw another major milestone reached on the Line 1 extension with Pioneer Village Station achieving substantial performance. Finch West and Highway 407 are the remaining pair of stations scheduled to reach substantial performance in the next two quarters of the year. High-speed training testing also began last month with the first Toronto Rocket making all station stops and crossover moves at revenue speed. A top speed of 75 km was reached southbound between Vaughan Metropolitan Centre and Highway 407 stations. 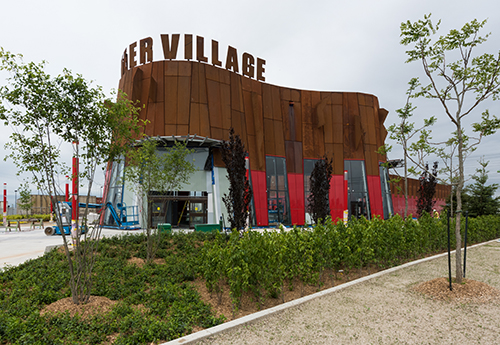