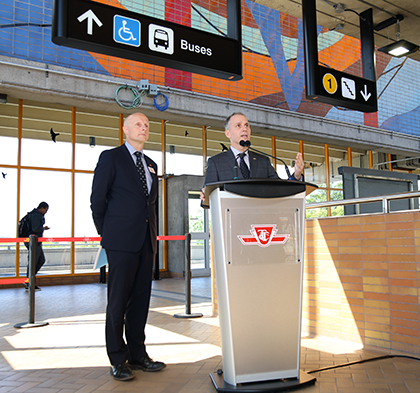 Approved by the TTC Board on June 15, the TTC is recommending a 10-year plan to expand express bus services that would benefit 70 million annual riders and attract 1.7 million new riders across the city. The Strategy and Service Planning Department estimates that one in every six bus riders would take advantage of an expanded express network.

“The five new routes that we introduced last year have delivered the results that we expected, with four of the five are already exceeding our ridership projections,” Colle said. “It’s important to remember that currently 60 per cent of all people travelling on the TTC actually travel by bus. It’s really the backbone of our system and one that’s worth investing in.”

On June 15, TTC Board members approved the Express Bus Network Study. It recommends a number of short- (2017-2018), medium- (2019-2021) and long-term (2022-2026) strategies and enhancements to improve the express bus network. Commissioners also approved a motion directing TTC staff to evaluate the effect on ridership should variable (premium) fares be introduced to Tier 1 and Tier 2 express routes and return with a pilot project for consideration.

Tier 1 routes are all-day express corridors with high daily ridership and are designed to be a precursor to rapid transit. Tier 2 routes are generally peak-only services on corridors that experience high peak-period demand.

In 2014, the Board approved a motion by current Chair Colle directing TTC staff to report back on the feasibility of implementing additional express bus routes in the city of Toronto. In an effort to reduce congestion and provide more rapid, reliable and reasonably priced transit options, the report would consider a number of issues, including: projected costs and revenues associated with existing express routes; an analysis of instituting peak-period express service on the top 10 busiest bus routes; and the implementation of queue jump lanes, priority signalling and dedicated lanes as ways to improve speed and reliability on existing and proposed new express routes.