Congratulations to Rick Leary, the TTC’s newest Chief Executive Officer. Last month, the TTC Board unanimously recommended Rick for the permanent position of CEO following a very thorough process that included a long list of candidates, both national and international. The appointment is now official and Rick has stepped into this permanent role, effective immediately. 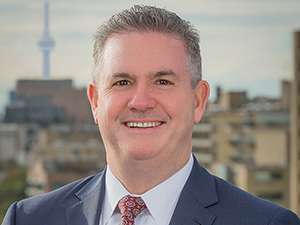 Congratulations to Rick Leary, the TTC’s newest Chief Executive Officer. Last month, the TTC Board unanimously recommended Rick for the permanent position of CEO following a very thorough process that included a long list of candidates, both national and international. The appointment is now official and Rick has stepped into this permanent role, effective immediately.

Prior to his stint as Acting CEO between January and July 2018, Leary was Chief Service Officer for Service Delivery/Deputy CEO for four years where he focused extensively on the punctuality, reliability and customer service responsibilities that were part of the delivery of services for streetcars, buses, Wheel-Trans, station management, transit enforcement and janitorial duties.

As CEO, Leary is clear on his commitments, focusing on three core elements that he believes are essential to the success of the TTC: providing high quality, reliable service; successful delivery of our capital projects; and ultimately securing the much-needed sustainable funding to keep building and delivering these high quality services. Combined, these elements make up the foundation upon which Leary wants the TTC to operate, while continuing to offer a service that makes Toronto proud.

A long and tenured history in public transit precedes Leary’s appointment as CEO. Prior to his arrival at the TTC in 2014, he was General Manager for York Region Transit, responsible for the delivery of bus, bus rapid transit and paratransit services for Ontario’s third largest bus fleet.

Prior to moving to Canada, Leary worked for the Massachusetts Bay Transportation Authority out of Boston. Beginning his career as a train attendant in 1984, Leary rose through the ranks in subway operations and eventually became Manager of Fare Collection Procurements, Director of Vehicle Engineering and Director of Bus and Engineering. After serving four years as Chief Operating Officer, he retired in November 2009 before moving to Canada.

If you want to know a little more about the man behind the CEO role, check out this week’s TTC Talk page in the Star Metro (Aug. 24 Q&A attached below).

Rick will be visiting all work locations in the coming weeks and months to meet with employees and more information about those visits will be shared as details are known.

Rick Leary’s no newbie to the transit world. Not only has he been with the TTC since he joined as Chief Service Officer in 2014, he was also General Manager of York Region Transit and spent his formative years at the Massachusetts Bay Transportation Authority (MBTA) in Boston. But Rick’s not just the CEO, he’s also a regular guy, and we want to introduce you to the man sitting in the TTC’s driver seat.

How did you get started in the transit biz?
I was always interested in transit as a kid. I remember riding with my dad when he was a Streetcar Operator in Boston and thinking I’d like to follow in his footsteps.

What’s your favourite subway stop and why?
Bloor-Yonge. I love the hustle and bustle and the people watching. As a major hub, it’s like a window into the rest of the city.

What’s your favourite bus or streetcar route and why?
The 509 Harbourfront. I really enjoy being by the water and the view is unparalleled.

What’s your favourite Toronto landmark?
This is a tough one – I have a few. I really relish time with my family, and the beach, the Toronto Zoo and St. Lawrence Market are a few of our favourites.

What is the best handheld food to take with you on transit?
I love those beef patties sold in a few of the stations – they’re amazing. But, as much as I’d love to bring a couple of those with me on the subway, I also know other riders don’t necessarily appreciate the smells that come along with someone else’s food. When I happen to crave patties while riding the subway, I’ll usually go for a little walk and eat them before getting on the next train.

What was the weirdest thing you learned about Toronto when you moved here?
When I first arrived, I was truly taken aback by the level of congestion. I knew Toronto was busy but I guess you can’t fully appreciate the intensity of traffic until you see 8-10 lanes on the 401 at a complete standstill.

What do you like to do for fun?
I love riding my motorcycle, a Harley. I really enjoy being by the ocean or on a beach,
spending time with my family, taking my five year old daughter to one of those play places, camping and live music – especially country.

Jays? Raptors? Or Leafs?
Leafs – or really any of the original six. I’ve actually wanted to come to Canada since I was a kid because of hockey.

What do you miss most about Boston?
Being close to family and the ocean.

Anything else you want to share with riders?
I just want everyone riding the system to know that my top priority is making sure that the people of Toronto get the transit system they need and deserve.