Introducing Marcus, a seven-year old TTC enthusiast who has his sights set on becoming a future TTC Operator or Engineer. Perhaps even a future Chief Executive. 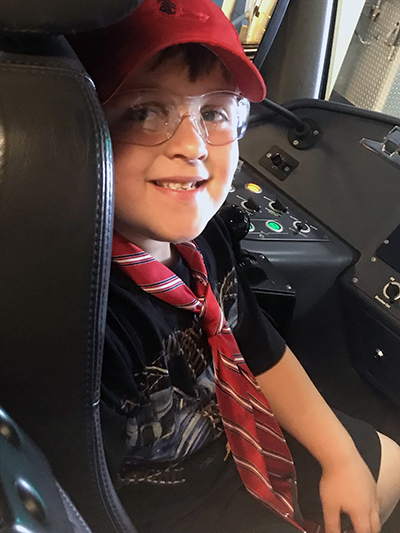 Introducing Marcus, a seven-year old TTC enthusiast who has his sights set on becoming a future TTC Operator or Engineer. Perhaps even a future Chief Executive.

An incredibly personable young man, Marcus can rhyme off every subway station on every line, says Al Pritchard, Head of Bus Maintenance and Shops.

“Every August for a few years now, I’ve invited Marcus back to the TTC to tour various vehicle modes. He’s such an enthusiast, many Operators recognize him when he’s riding the system on Saturday mornings with his dad to watch service in action, and they really like chatting with him,” Pritchard says.

While many boys his age enjoy talking about video games with their friends, Marcus, age seven, prefers to educate his pals about the TTC. He tells them how great the TTC is and how they should conduct themselves when riding the system. It’s no wonder the Training and Development Department loves this little guy, adds Pritchard, who is thankful to its staff for accommodating Marcus’ visits.

Marcus has become a veteran of site visits. He has practiced on the bus simulator at Hillcrest, the subway simulator at Wilson and the streetcar simulator at Leslie Barns. He has toured Transit Control and even compiled a book full of transfers from across the system.

“When I first met Marcus and his parents at a Harvey Shop open house, I emphasized the importance of getting and maintaining good grades to land a job at the TTC. Already an A student, I think we may have found a future CEO,” he says.