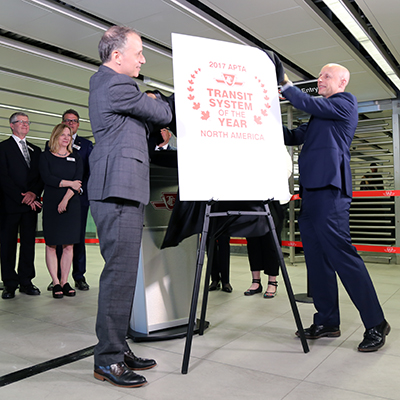 This isn’t just the TTC saying so – this is our peers from transit systems across North America saying so. The TTC last won this award more than 30 years ago, in 1986.

Just five years ago we set out to change the TTC. We developed a five-year plan that put the customer at the centre of all that we do, from service planning to service delivery, including a new station management model, customer charter, fleet and infrastructure renewal, and how we manage our most important asset – you, our people. I said then that if we upped our game and pulled together, we could, once again, be number one in North America. And now we are!

I accept this award on behalf of those come to work every day, proudly and diligently delivering one of the most vital services a city of this size can rely on. After almost 100 years and 31 billion trips taken, the TTC has grown to become North America’s third largest transit system, after only New York and Mexico cities.

Below is the logo developed by our own in-house graphic designers, which will begin to appear on all of our vehicles.

We still have much work to do, of course. This honour, after all, is not bestowed on transit agencies for their perfection, but rather for their vision and measurable efforts to execute that vision. Over the last five years, we have achieved a great deal, including:

Once again, congratulations one and all!

The CEO Video can be viewed online, on TTC-TV screens and at TTCasts on the TTC intranet.