Arrow Road: Robert Burroughs, Marlon Davis: “Bus driver was extremely kind, funny, talkative, made a couple of jokes, enforced the rules in a way to make people smile and laugh about it and actually want to listen … provided helpful reminders and acknowledgement when leaving the bus. ONE OF THE BEST RIDES I’VE BEEN ON, ONE OF THE BEST BUS DRIVERS I’VE HAD, AND THE HIGHLIGHT OF MY DAY! KEEP UP THE GREAT WORK WHOEVER YOU ARE! :)” … Shahin Derakhshandeh, Donna Duncan, Brian Dunham, Mykal Griffiths, Michael Maguire, Frank Ragone, Delroy Rankine, Mario Rucci, Ranjit Singh, Jeremy Steed, Giancarlo Trimmeliti

Eglinton: Esmael Abdurahman, Ammar Ahmed: “I always appreciate the Operator’s job because it is tough to deal with customers sometimes. But I was amazed by the observation of this Operator and his safe driving … I asked the Operator how he knew that car would not stop at the red light. The Operator told me that the head of the car driver was downwards so it means that he is texting on his phone and not aware of the red light.” … Juleesa Anthony, Sameer Arora, Christopher Barlow, Percilis Christopoulos, Sophia Clarke, Roy Dobrijevich, Michael Easthope, Carlton Fowler, Egbert Felix, Benson Genah, Alfred Grimbleby, Craig Hunter, Patrick Hurtubise, Mohmed Jeebhai, Athanasios Kollias, Constantin Kotsopoulos, Nick Niciforos, Colin Pinder, Kashif Rafiq, Jim Stojanovski, Risto Temelkovski, Amanda Trebicock, David Woolridge, Steven Wrigley: “He was very kind and funny. He made many jokes. He was outgoing and positive. I got on at Sheppard to go to school and he literally made by morning. I felt like my day went well because I was laughing so early in the day.” … Nasrat Ullah, Brian Williams, Curate Williams, Harriet Younge

Wilson-Bus: Shabniz Mitha: “I wanted to commend the woman who was driving the bus on this trip. She was friendly, courteous and a careful driver.” ... Vito Perri, Laura Ryan, Josephine Slark 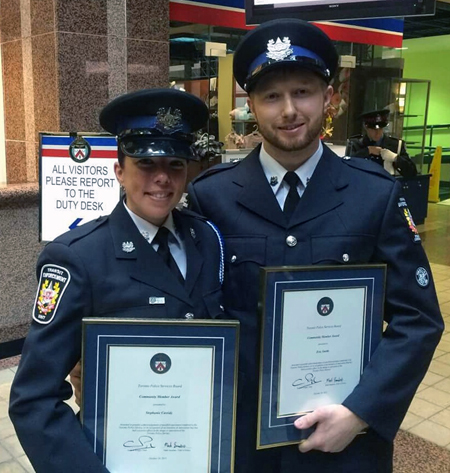 Congratulations to TTC Special Constables Stephanie Cassidy and Eric Smith on receiving Community Member Awards from the Toronto Police Service in October. While on patrol late last year, the pair was flagged down by frantic pedestrians who directed their attention to a man contemplating jumping from Leaside Bridge. Smith and Cassidy managed to pull the male from the ledge and keep him safe until emergency responders arrived on the scene.
X
Cookies help us improve your website experience.
By using our website, you agree to our use of cookies.
Confirm