Birchmount: Garifalia Akouros, Michael Behagg, Simone Carrington, Clinton David, Stephen Devocht, Maninder Dhaliwal, Samantha Druce, John Foster, Marcus Fernandes, Mark Graham, Neil Hermes, Eric Hildebrand, Anthony Khan, Eudine Latchman, Kathy Peonidis: “I have to say the young lady driving the bus was great … She saw me (in my wheelchair) and asked if we were coming on the bus. I said yes and she made sure we were loaded before anyone else. I would like the driver to know that we really did appreciate what she did.” … Bandula Liyanaarachchi, Concetta Moncada, Franz Philip, Milad Pourkarim, Bill Richards, Brandon Webb, Christopher Williams, Andrew Wong

Mount Dennis: Abdulahi Abdi, Raminder Bajwa, Milan Baric, Keshia Blagrove, Kevin Borges, David Elrick, Angelo Flabiano, Rajveer Garcha, Amandeep Grover, Leda Halle, Mandeep Kang, Mohsen Keshtkar, Oniel Lawrence, Mark Lemonious, Enzo Marcello, Meghann McDonough, Levin Moci, Jorge Perez, Ryan Rajmoolie, George Raptopoulos, Danny Rosa, Nadia Roubos, Pritpal Singh, Todd Skinner, Hokei So, Fredrick Succi, Hanefiamar Tanim: “Because of some health problems I use a walker. As soon as I got into the bus the driver made an announcement to ensure that I got a seat. And immediately I was offered two seats from two passengers. Then the bus driver made sure that I was seated before she started off again.”

Queensway: Pratima Anandjit, Robert Carrine, Adam Elfiki, Patricia Gale, Steven Lachapelle: “My wheelchair was low on power and the Operator comes to my rescue and pushes me up the ramp and into the bus. Also the Operator dropped me off in front of the shelter, thank you very much!” … Najeevraj Nadarajah, Nelish Nazarali, Mohammad Rana, Jermaine Scott, Charles Shirton, Behrang Sina, Basil Smith, Megan Smith, Emanuel Tsimenidis

Roncesvalles: Barry Doyle, Frederick Fosu, Terrence Harrison: “A young lady was going to get on with a baby carriage and the driver went right down to assist. He announced that the stops at York and Simcoe were no longer in service and that we needed to use University. He obviously enjoys his job – I really hope to see him again, he made my morning.” … Alexander Louie, Janet Moniz, Yogi Rajalingam, Peter Reinhardt, Mitchell Soares, Moses Wajcenberg 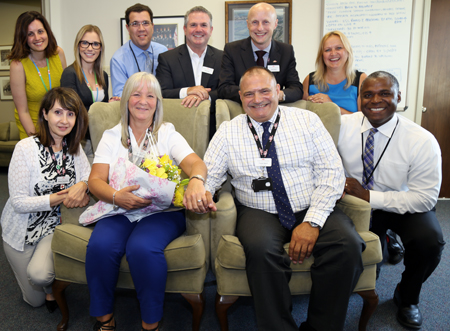 Congratulations to Training’s Frank Nardi and Stations’ Barb McLeod who got engaged at Head Office on Aug. 10. Nardi surprised his partner of 17 years by popping the question at a meeting in the CEO’s office. CEO Andy Byford played along with a feigned meeting before stepping out and returning and presenting flowers to the newly engaged. The pair was also congratulated by CSO Rick Leary, CPO Gemma Piemontese and seventh-floor staff.
X
Cookies help us improve your website experience.
By using our website, you agree to our use of cookies.
Confirm