Birchmount: Elizabeth Briscoe, Joseph Carlucci, James Davis, Donald Delay: “Just want to say thank you to the kind man driving this bus. I was so exhausted from work and did not feel like smiling as I got on the bus at Kennedy Station, but he still greeted me and smiled. By the end of the ride I could help but feel happy because this driver’s aura rubbed off on me.” … Timothy Elliott, John Foster, Neil Hermes, Antonio Hernandez, Monique Klobucar, Zhiwei Li, Michael Machado, Karen Macklin, Richard Nemeth, Gary Novachko, Donald Oake, Rady Osman, Charles Providence, Ivan Salomon, Christopher Shaw, Naresh Sivadasan, Michael Vasquez

I have come to realize that people are very quick to jump on the TTC and its staff when negative incidents occur, but I have very rarely heard any positive feedback. I wanted to share an experience my parents had with one of your drivers (Eglinton’s Sean McKnight) in February on the 86 Scarborough bus at the Dean Park Rd. stop.

My parents are a very youthful 85 and 82 years old. On the morning of Feb. 23, 2016 my parents were heading down to Sunnybrook Hospital for my mom’s doctor’s appointment. When they saw the bus they started rushing so they would not miss it. My dad unfortunately caught his foot and tripped while making his way to the bus. The driver saw was had happened and immediately came to assist my parents. He very kindly went to my dad, helped him up, commenting not to worry everyone trips, and escorted him onto the bus and into a seat. He asked several times if he could call an ambulance or if he needed any help. Not only did he help him physically, he was so respectful and caring towards not only my dad, but both my parents. His kindness was so appreciated by my parents because in a world where seniors are often treated as a burden, he treated them with respect and dignity. Luckily, my dad was not seriously injured, but he did have some bad bruising and pain related to the fall.

Another passenger on the bus also commented to my parents what a kind man the driver was. Please pass this letter on to the TTC administration because I feel (as do my parents) that this driver should be accommodated for his actions that went far beyond what is expected of a TTC employee. 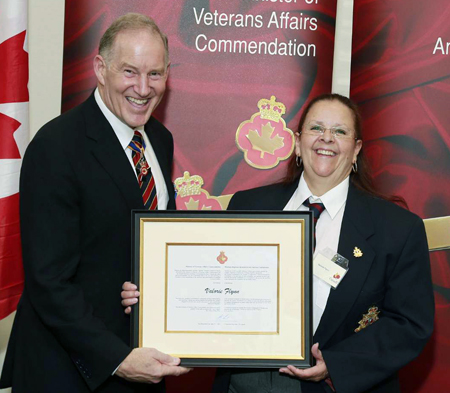 “Words cannot explain the joy I have when I’m with them,” says Storeperson Valorie Flynn. She’s referring to Canadian veterans and serving them has earned her the Minister of Veterans Affairs Commendation. Flynn was one of handful of Ontario residents who were honoured for their care and dedication to Canada’s veterans on June 16.

“I was really surprised to be nominated and then receive the Commendation. There is nothing that makes me happier than to see the beautiful smiles on the veterans’ faces when I take them out for a day or overnight,” Flynn says.

The Veterans Affairs’ citation is a glowing tribute to the care, compassion and respect Flynn demonstrates for veterans through an extraordinary amount of volunteer time. She is a Life Member of the Royal Regiment of Canada Association since 2009, where she is a cadet liaison with the 2736 Cadet Corps. As a Director, Flynn has been involved with the Veterans Concerns Committee, which was recently developed and organized to serve veterans.

At Sunnybrook Hospital, Flynn promotes quality of life by ensuring veterans are involved in hobbies. She also assists with day trips to various events, such as the regimental ceremonial parades and the CNE’s Warriors’ Day. Flynn volunteers at Sunnybrook’s Blythwood Social Club by serving food and refreshments to veterans.

She’s very active with the Royal Canadian Legion, serving as Service Officer of Branch 266/46, where she ensures veterans are receiving the benefits they’re entitled to during home visits or visits at the branch. She also helps veterans determine and apply for eligible medals. Flynn also assists at many legion events, including poppy drives.

“I have been getting our cadets involved with the older veterans serving them their Christmas and Easter lunches at the legion. I will always take pride in whatever I’m doing with any veteran both young and old,” she says. It’s in tribute to my mother, and all her brothers, who were in the military serving in WWII during their young lives. Some made it back and some didn’t.”

The Minister of Veterans Affairs Commendation was established in 2001 by warrant of the Governor General and with the approval of Queen Elizabeth II. 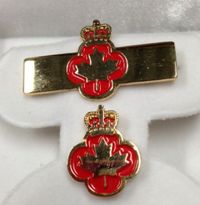