Community Relations: Christina Joseph: “We just wanted to thank you and the TTC crew for the tour you invited us to last Friday. Both MP Levitt and myself were thrilled with the experience.”

Mount Dennis: Ashraf Ali, Keshia Anglin, Jasjit Bajaj, John Bekiaris, Michael Benjamin, Patrick Bygrave, Helder Da Ponte, Haver Demirer, Rhonda Felix, Yegish Gregorian: “I was in a rush to go to Lawrence West so I could catch the subway to go to Yorkdale for a movie. But I wasn’t quick enough and the bus began to pull out of the terminal. But the driver noticed me and was kind enough to stop the bus even though it had already pulled a good distance away from the terminal. I thanked the driver and promised him I would make sure to mention it.” … Miroslaw Jacyniak, Shamsher Jaswal, Mandeep Kang, Victor Maleek, Brian Sidsworth, Joravar Singh, Richard Tenaglia, Stuart Yalowsky, Jackson Yee

Wilson-Bus: Robert Bennett, Davide Demarinis, Shabinz Mitha: “The lady bus driver was so lovely!! She waved to my three-year-old son as we crossed the road. We were just walking by and my son was so happy as he loves buses. Thank you so much to that driver for her enthusiasm, kindness and smiles.” … Lester Moseley, Rolland Okai 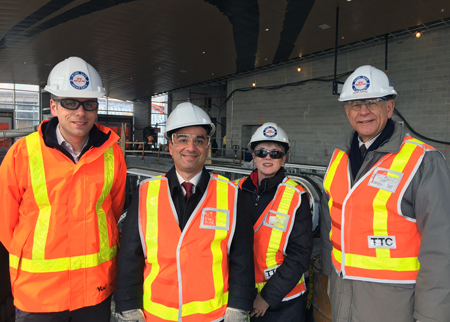 Letter: On the way to Home and Garden Show

I was going to the show with my friends using public transit. At the Home Show, I wish to treat my friends for lunch and I discovered that I do not have my wallet in my purse. At that time I did not know if I somehow dropped the wallet or somebody stole it from my purse. In it I had some money and few prepaid cards. We returned home at around 6:30 p.m. and there was a message on my phone. The call was from the TTC to call them back. I called and was extremely surprised that my wallet was found on our first bus No. 50, leaving Burnampthorpe loop at 9:40 a.m. The driver’s name of that bus was David Foster (Queensway). I picked up my wallet with all belongings in it next day at the TTC. Thank you, David, for your honesty and fast response. Thank you to the TTC in general for good work. We passengers must be appreciative more. I am using public transit quite often and I hope will meet David on my next trip and I will thank him in person for that. Keep up good work, TTC.

Letter: Thank you for generous donation

We are very grateful to have received your very generous donation of winter coats for our students. It is especially heartening to receive such a donation during the Christmas season – and beyond – and know that the spirit of giving is alive and well! Thank you very much to the staff at the TTC Mount Dennis Bus Division/Garage for thinking of us at this time of year.As an inner city school, we do have a number of very needy students. As you may imagine, students who aren’t comfortably warm in winter are less likely to focus, behave appropriately and learn at school every day.  On behalf of our students, staff and community, please accept our sincere appreciation for your donation!