Arrow Road: Vincenzo Calautti, John Di Censo, Janaudis Ferreira, David Hoy, Christian Gendron, Michael Maguire, Elijah Mapgaonkar, Benjamin McBean, Oleh Metelsky, Faiz Mohamed, Denham Mullings, Tejinder Rayat, Dario Selak, Nick Stavrou, Nolan Stuart: “I wish to take this opportunity to thank one of your drivers, Nolan, for going above and beyond his duty to be kind and to comfort a frightened old person. He ensured that I was told exactly what would be wise for me and sat with me while we waited for EMS.” … Lisa Jo Sutherland, Jason Thompson, Emaldi Washington

Birchmount: Lester Abarquez, James Cavanagh, Randy Clarke, Anthony Cornacchia: “Somehow he saw that my ID badge had dropped from my belt and stopped the bus to let me know. I found that very considerate and kind. I wasn’t expecting it so I don’t think I expressed my gratitude to the driver appropriately. If you could let him know that I am truly thankful.” … Natalie Dawood, Cheryl Durnin, John Foster, Scott Grant, Dale Hawtin, Neil Hermes, Kent Holliday, Carlos Hope, Thomas Leithwood, Sean McLean, Filip Milosevic, Sandesh Prashad, Sugunthan Shanmugathasan, Danisius Tisseverasinghe, Craig Townsend

Roncesvalles: Michael Bajolek, Tricia Brown: “It was raining and a truck was blocking the view of the road. I hadn’t quite made it to the stop when the streetcar started to leave. The driver saw me put up my hands in a prayer and she stopped for me to get on. Very appreciative of the gesture on her part as the Long Branch cars are few and far between.” … Yolan Fairclough-Nelson, Colin Heaslip, Frank Lapadula, Sheldon Morant, Mark Toste 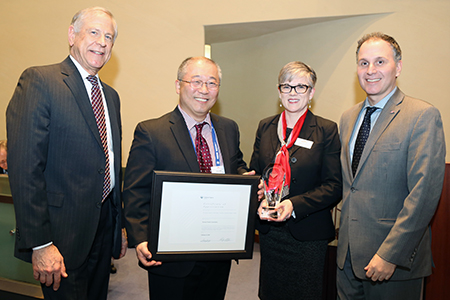 TTC Receives Engineering Project of the Year Award for TYSSE

The Toronto-York Spadina Subway Extension (TYSSE) has received the 2016 Engineering Project of the Year Award from the Professional Engineers of Ontario – York Chapter. The award was recognized by TTC Chair Josh Colle at the TTC Board Meeting on Feb. 21.

“It is my pleasure on behalf of the Board to announce that the TYSSE Project was recently awarded the Project of the Year Award for 2016 from the Professional Engineers of Ontario – York Chapter,” Chair Colle said. “The award highlights a high degree of engineering and leadership demonstrated in conjunction with the three station design teams – AECOM, ARUP and TSGA – in categories such as innovation, sustainability, commercial viability and impact on communities. Congratulations to the TYSSE project team.”

The Professional Engineers of Ontario – York Chapter award recognizes the contribution, both to the engineering profession and to the local community, by an organization that has completed (to 90 per cent or more) an outstanding project in the year.

Many thanks to the following as well: Andy Byford, John Derringer, Ryan Parker, John Garbutt, The CCAA, Tom at Star Box; all divisional managers and garage managers for the buses; Walmart Canada for the continued support; Crayola Canada; all participating Rec Committees; Ed Wahl; Scarborough Ice Raiders; Dave McConlin and Chris Nottbeck from Birchmount Rec; Donna Riddell from The Duke Tavern; Marcela Garcia; Pizza Pizza; Tamara for coming and thanking us for what we do; Jimmy and Bob DJ extraordinaires. Thanks also to Mike DeToma for helping spread the word every year.

Bigger and better next year!