Malvern: David Brough, Ashley Bullen, Cheryl Chiasson, Davis Drepaul, Ian Fox, Harley Johnson, Tim Jollimore, Derek Kelly, Franco Lacuata, Allan Lewis, Kyron Lewis, Giselle Lohr, Norman Mah, Sharon McKeigue, Ellington McLeggon, Donald Parish: “I watched the driver help a lady that was new to Toronto figure out her route. A bit later, he helped a man plan his route to Etobicoke. When the man got on the bus and asked for help, the driver put the bus in park before getting out of his seat and taking out his phone to help him figure it out.” … Brian Patterson, Jacinta Preston, Paul Stapley, Kristopher Talbot, Kanagarajah Thiagarajan, Angelia Woo, Ronald Walker

Queensway: Peeyush Arora, Vida Baska, Daniel Clancy, Robin Edwards, Patricia Gale, Roberto Mancini, Elise McAdam, Jaime Paiva, Jose Quintanilla, Kishan Shah, Baljit Singh, Sukhjinder Singh, Jay Thornberry: “Jumped off the bus to walk my kids to school, one of my kids left her entire backpack on the bus. We assumed we would never see it again. There was hundreds of dollars in dance and school supplies inside not to mention all of her school work and assignments and her own personal journal. We were all devastated. But the next driver of a 40 bus provided me with great assistance, issued a text to all 40 drivers and encouraged me to check some of the next that arrive … we saw him approaching; he noticed us right away and began waving. The door opened and he had our backpack! We could not believe our luck. The drivers of the 40 Junction route feel like family. We are lucky to have such dedicated people working our route and I hope they can be commended for their outstanding work. Thank you, drivers of the Junction 40 bus route!”

Wheel-Trans: Eric Gottlieb, Kirby Lai, Theresa Legge, Chris Loukas, Cristina Martinez, Stephanie McCanny, Kasi Morgan, Jennifer Pattison, Tony Policelli, Raila Rintala, Nicole Roomes: “Customer fell down and was unable to get up. She was able to get to her phone and called Wheel-Trans. The Reservationist who answered was very kind and helpful and was able to help the customer by calling EMS and remained on the line to make sure the customer was okay.” … Roula Silveira, Mitra Stergios, Keaon Thompson 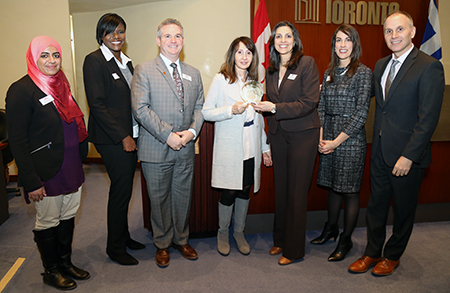 The TTC was recognized as one of Canada’s Best Diversity Employers for 2018. The MediaCorp Canada award recognizes employers with exceptional workplace diversity and inclusion programs. The TTC was selected as one of Canada’s best diversity employers because of its efforts in providing accessible public transit, working with community organizations to reach out to female candidates and creating a diversity and inclusion lens to help employees see different perspectives with respect to sex and gender, disability, race, colour and ethnicity, Indigenous peoples, new Canadians and refugees. The award was presented to Diversity and Human Rights staff at the April 11 Board meeting.
X
Cookies help us improve your website experience.
By using our website, you agree to our use of cookies.
Confirm