Malvern: Paul Andrews, Bernard Balian, Baldwin Bonadie, Jermaine Brown, Ashley Bullen, Kevin Carr, Jonathan Fitzpatrick, Romuald Gulbinowicz, Kester Harris, Jason Head, Kwokleung Ho, Mark Holmes, David Judson, Derek Kelly, Fathiabdo Mahmmed, Judith Martin, David So: “I was having a tough year, but it felt so long since I’ve had someone smile and tell me things would get better. Thank you for even this small gesture, which made my year a little brighter.” … Samson Surenthiran

Mount Dennis: Barbara Martinez, Scott Northcott, Ahmed Eshra, George Joseph: “It was super snowy outside and really cold … Thank you for this morning as I was on time for my class and I didn’t have my class waiting for me!” … Eldon Wickham, Dwayne Humes

Queensway: Loraine Boudreau, Vincenzo Meffe, Paul Da Torre, Jerry Kaluzny, Kimberley Thompson, Richard Rost, Ana Quintanilla, Kevin Emoff: “I would just like to say that in this very busy and fast-paced environment we find ourselves in it is always pleasant to have the kindness of another to be the first impression of the TTC I have on my morning.” 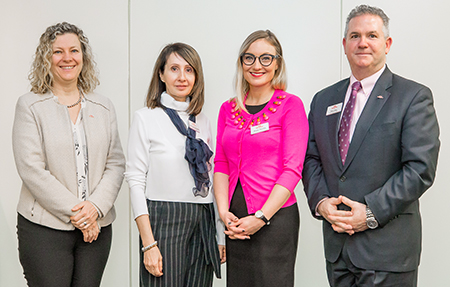 Commissioners congratulated the TTC in January for receiving its third consecutive award as one of the top employers in the Greater Toronto Area presented by MediaCorp Canada Inc. Accepting congratulations on behalf of all employees from TTC Chair Jaye Robinson, far left, were: Chief People Officer Gemma Piemontese, Human Resources Executive Director Megan MacRae and CEO Rick Leary.
X
Cookies help us improve your website experience.
By using our website, you agree to our use of cookies.
Confirm