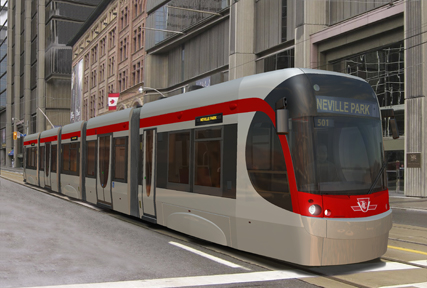 March 2: The TTC introduces Automated External Defibrillators at 30 of the busiest subway stations.

May 7: The TTC brings back PCC streetcars on Sundays on the 509 Harbourfront for the summertime.

May 18: Toronto Police Officers begin patrolling the subway system to assist with traffic, safety and security on the TTC.

June 3: The TTC introduces new security features to the Metropass, Weekly Pass and GTA Weekly Pass in an effort to thwart counterfeiting.

August 7: The TTC officially announces the purchase of four tunnel boring machines for the Spadina subway extension. The TBMs will be manufactured in Etobicoke.

August 26: Commissioners approve the Transit City Bus Plan, which calls for bus service every 10 minutes or better on 21 Transit City Bus Network routes during the day and evening, daily, starting in the fall of 2010.

September 11: The Government of Canada’s Infrastructure Stimulus Fund announces $64 million for 20 TTC projects to be completed by spring 2011.

September 24: The TTC carries its 27 billionth rider. One billion customers are carried roughly every 30 months.

October 12: An amended TTC By-law No. 1 goes into effect with increased fines.

October 15: The TTC begins a month-long trial to improve service quality on the 501 Queen streetcar service by splitting the route into eastern and western halves.

November 23: The TTC introduces a temporary Adult ticket and suspends token sales until Jan. 3, 2010 when new fare rates are introduced.

November 27: The TTC officially breaks ground on the Toronto-York Spadina Subway Extension. The 8.6-km extension is expected to be completed in 2015.

December 31/January 1: The TTC closes the year by providing free, midnight service to its customers courtesy of the Liberty Entertainment Group.