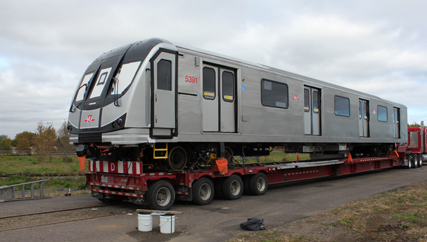 January 20: Commissioners endorsed a letter from TTC Chair Adam Giambrone and CGM Gary Webster that called for a review of customer service at TTC, and for the creation of an independent panel to help improve the riding experience.

February 17: Steve O’Brien, General Manager of One King West Hotel & Residence, was introduced as the voluntary Chair of the Customer Service Advisory Panel. Panel members were named on March 2.

March 22: 25th anniversary of the official opening of the Scarborough RT.

May 10: TTC launched a consultation program inviting the public to participate in the design of TTC’s future low-floor, light rail vehicles.May 18: CUTA presented TTC a Corporate Recognition Award in Ottawa for the Work Safe-Home Safe initiative.

June 2: Commissioners approved a $54-million contract for the purchase of four tunnel boring machines to dig twin tunnels for the Eglinton Crosstown LRT.

June 18: 100th anniversary of the Toronto ferry boat, Trillium, which was once part of the TTC’s historic ferry service up until 1960.

December 31/January 1: The TTC closes the year by providing free, midnight service to its customers.