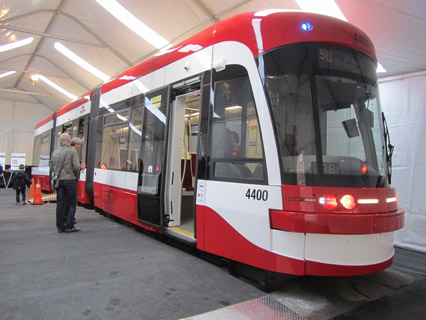 January 17: The TTC took delivery of the first of four tunnel boring machines for the Spadina subway extension.

January 24-27: The TTC holds a series of public meetings to provide information regarding proposed route changes and re-allocations.

January 31: The TTC improved its e-alert service with a filtering feature that allows customers to select specific subway lines or surface routes that they prefer to follow.

May 11: The TTC announced the introduction of summertime Station Ambassadors at key downtown stations.

June 8: The Commission approved the conditional adoption of the Metrolinx PRESTO Farecard System.

June 16: The TTC, in partnership with Distress Centres of Toronto and Bell Canada, introduced Crisis Link, a new initiative to help prevent suicides in the subway system.

June 17: Officials from the province, Toronto, York Region and the TTC officially launched the first tunnel boring machine (TBM), nicknamed Holey, on the Spadina subway extension. It started boring the next day.

June 21: Birchmount Operator Sherry Newton was named Transit Community Watcher of the Year (2010) for her role in helping a young assault victim.

July 11: The TTC activated the Next Vehicle Arrival System for the bus network.

September 1: The TTC marked its 90th anniversary as a public service in the city of Toronto.

September 19: Many non-unionized employees were given notice of job eliminations and voluntary separation packages in an effort to help balance the 2012 Operating Budget.

October 13: The TTC announced the establishment of a Customer Liaison Panel and a series of regular town hall meetings to hear directly TTC customers.

October 15: The TTC carried its 28 billionth customer since its inception in 1921.

November 1: A redesigned Metropass with a clipped edge at the top-left corner of the pass is introduced.

November 12-15: The TTC hosted a public open house to preview a mock-up of the 100-per-cent, low-floor accessible streetcar of the future.

November 24: The TTC held its first Town Hall on Customer Service in the Council Chamber at Toronto City Hall.

December 14: The Commission approved a report that establishes the criteria for the return of public/citizen representation on the TTC Board.

December 31/January 1, 2012: The TTC offered free New Year’s Eve rides and extended service in the subway and on most surface routes.