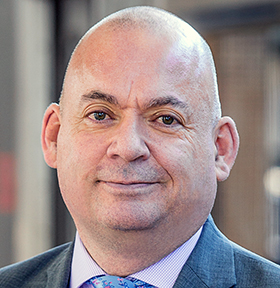 The TTC is pleased to announce the appointment of Mike Palmer to the position of Chief Operating Officer (COO) of the Operations Group, effective April 30, 2017.

Mike came to the TTC from Thales UK, in London, England, where he was a Project Manager on metro and mainline rail re-signalling programs. Prior to that job, he worked for London Underground (LU), starting as a Guard in 1982, and moving through the ranks as Transit Controller, Transit Supervisor and Mobile Supervisor.

In 1995, he joined a project team building the Jubilee line extension, becoming the Control Centre Manager during and post commissioning. Once the line was open and stable, Mike moved on to manage a train crew depot for three years looking after 150 Drivers and 14 Supervisors. He then returned to the LU to manage projects as Lead Operational Manager for the Jubilee line seven-car project (increasing the trains from six- to seven-car consists) and the Jubilee and Northern line upgrades where he led the operational project team  representing the client/end user (where moving-block, transmission-based signalling systems were installed and commissioned).

Overseeing the LU’s and Thales’ response to major events as Euro 96, Millennium Celebrations and London 2012 provided Mike with extensive experience in planning and managing large-scale events. On leaving the LU in 2011 after almost 30 years, he continued to work on the Northern line re-signalling project as the contractor with Thales before moving to Toronto.

As COO, Mike is responsible for the delivery of reliable and punctual subway service, and maintaining the transit network and rail fleet to stringent safety and customer service standards. His areas of responsibility include: Operations Financial Control, Plant Maintenance and Revenue Operations. He also oversees Subway Operations, which includes: Automatic Train Control, Rails Cars and Shops, Subway Infrastructure and Subway Transportation.