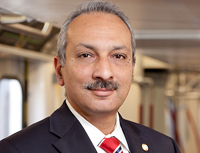 The TTC is pleased to announce the appointment of Sameh Ghaly, M. Eng, P. Eng., as Chief Capital Officer of the newly named Engineering, Construction and Expansion Group. The appointment was effective on Jan. 9.

Prior to that department’s name change from Transit City in March 2011, Ghaly had been Program Manager of the Toronto Transit City Light Rail Plan since 2008. Before assuming that role, he was Chief Project Manager of the Construction Department for almost two years.

Ghaly joined the TTC in 1997 and has held progressively responsible positions in the Construction Department. He brings a wealth of experience to his latest role, with a quarter-century of knowledge in project management and service in both the public and the private sectors.