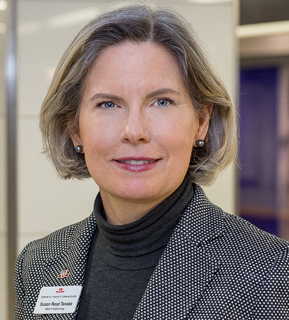 The TTC is pleased to announce the appointment of Susan Reed Tanaka to the position of Chief Capital Officer of the Engineering, Construction and Expansion Group. The appointment was effective on Aug. 6, 2015.

In her new role as the owner of the capital portfolio, Reed Tanaka is responsible for developing, improving and expanding the TTC network. She had been serving as Acting Chief Capital Officer since March of this year.

Reed Tanaka, who joined the TTC in 1990, brings a wealth of experience to her new role. She is a licenced Architect and was Head of Engineering since 2006. Prior to that position, she served as Construction Manager in charge of construction services.

Over the course of her TTC career, Reed Tanaka has been involved in various technical committees including NFPA 130 and the AODA Standards Development Committee for the Built Environment . In 2004, she was appointed by an Order in Council of the Provincial Government to the Building Materials Evaluation Commission.