130 years ago on Aug. 15, 1892, the first electric streetcar made its way from St. Lawrence Market to Rosedale along Church Street in Toronto. 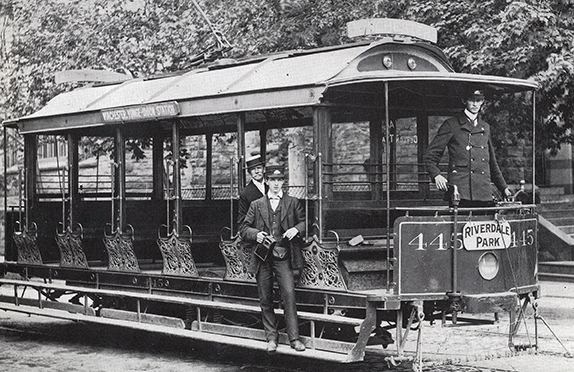 Hurray for the electric street railway!

One hundred and thirty years ago on Aug. 15, 1892, the first electric streetcar made its way from St. Lawrence Market to Rosedale along Church Street in Toronto.

It was only 18 feet long – a wooden car with open platforms – but it made history and the watching crowds were thrilled with the shift to electrification and away from the horse-drawn vehicle.

Toronto, like many progressive cities in the early 1890s, had jumped on the electric street railway bandwagon. The public was fascinated with electricity, and the days of the horse-drawn streetcar were numbered.

The Globe gave this account on Aug. 15, 1892: “Everything connected with that first trip was auspicious, even to the weather … telegraph poles looked like rungs of a ladder as the streetcar flew past. Horse cars on the down trip went by at their best speed as if they were in dread of losing their job; groups of smiling ladies on street corners were out of sight before one could smile.”

At the end of the TRC franchise in 1921, the Toronto Transportation Commission was established to operate a publicly owned transit service.