The TTC is offering a $25,000 reward for information leading to the arrest and conviction of the suspect who shot a Collector at Dupont Station on Feb. 26. 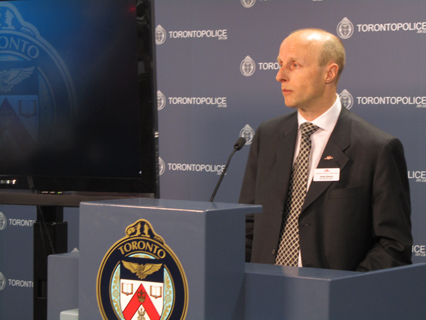 The TTC is offering a $25,000 reward for information leading to the arrest and conviction of the suspect who shot a Collector at Dupont Station on Feb. 26.

Dupont Collector's letter of thanks

The announcement was made by CEO Andy Byford at a joint TTC and Toronto Police news conference at the College Street headquarters this morning (May 29).

“This is a dangerous assailant and we need to take this person off the street,” Byford said. “We’re serious about apprehending this person and we need the help of people in Toronto to find who did this to one of our colleagues.”

Toronto Police and the TTC is asking for the public’s assistance and are hoping that the reward (put up by the TTC for the very first time) will help to re-ignite some new leads and encourage any witnesses to come forward.

Hold Up Squad Staff Inspector Mike Earl called the shooting a “brazen and cowardly act.” He said the investigation determined that the same individual is responsible for two other Dupont Station robberies in June and October of last year. Earl stated that a person who chased the suspect in last February’s hold-up has still not come forward.

At about 7:30 p.m. on Feb. 26, the suspect, wearing a mask and brandishing a revolver-type handgun, approached the Collector Booth at Dupont Station. In what appears to have been a failed attempt to rob the Collector, the suspect began to leave, but for reasons unknown, turned back toward the booth and fired three shots into the glass, striking the Collector twice. The suspect then fled through the station’s northwest exit at the corner of Dupont St. and Spadina Rd. CCTV cameras in the station captured images of the attack.

The TTC has taken steps to enhance the safety and security of Collectors, including reducing the amount of cash in booths, increasing the level of debit transactions and boosting patrols of both uniformed and plain clothes police officers and Transit Enforcement Officers.